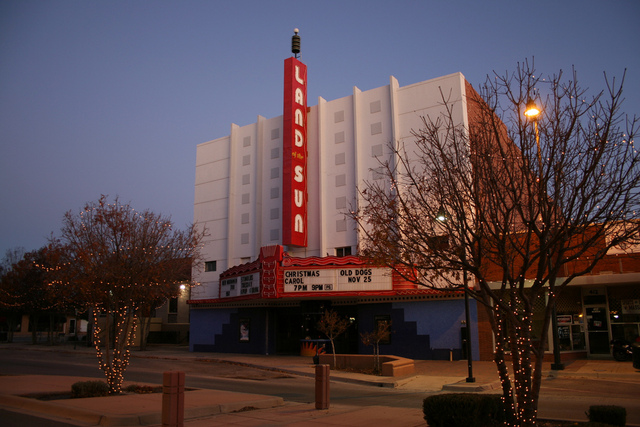 The Land-Sun Theatre was opened on August 15, 1947. A beautiful Streamline Moderne style theatre, now divided in two, a very active Main Street program in Artesia is raising money for a façade renovation and restoration of the original marquee. At last report, the operators were to install new carpet, sound, and seating. Still the only movie house in town!

In March 2020 it was closed (together with all movie theatres) due to the Covid-19 pandemic. It was announced on August 15, 2020 that the closure would be permanent.

Here is another photo:
http://tinyurl.com/34ry4l

Here is another photo:
http://tinyurl.com/34ry4l

Compare it with Lost Memory’s photo postings to see what a great job Artesia did on the restoration!

A rare newsprint photo view of the Land of the Sun from 1949 the year it opened in Artesia.

I worked here as a projectionist assistant while also running movies at the Hermosa Drive In theatre. I think I was about 16 at the time, there is not yet a listing for the drive in here, I can later add some comments. The LandSun was a single screen, Movies I remember here are “Whats New Pussycat”, Boy Did I Get A Wrong Number" with Bob Hope. The theatre down the street was closed and converted into a restaurant, although the projection booth was still intact with projectors and equipment. I was here when the Apollo 1 astronauts died, and when the Beatles music was banned. We had just put up a 24 sheet billboard at the drive in, and had to pull it down and replace it with something else. We also had a pickup truck that had two 6 sheet boards for movie adds. I sure wish I had a camera back then and the foresight to take pictures.

Motion Picture Herald, Aug. 16, 1947: “Ray Bartlett has named it the Landsun theatre and is opening it this month in Artesia, N. M.”

AMC Theaters announced that they are closing this theatre permanently.