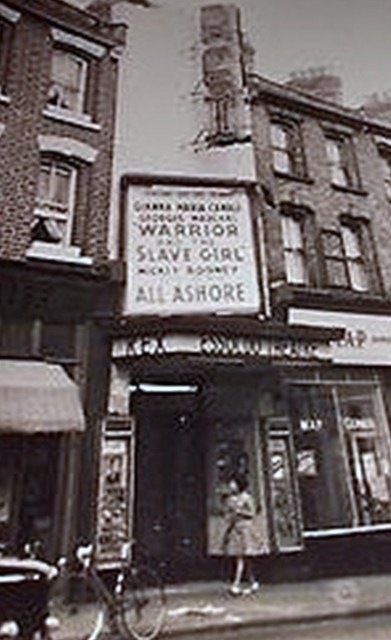 Located in the north London district of Wood Green. The entrance to the Palais De Luxe was through a former terrace house on Station Road. The foyer was a narrow passage that lead to the 850 seat auditorium block on River Park Road, that ran parallel to Station Road at the left and behind the row of terraces.

It opened in 1912 and was operated by River Park Cinemas Ltd. It was reconstructed and modernised in 1931 to the plans of architect Leslie H. Kemp. Seating was provided on a single floor and the proscenium opening was 30 feet wide. It was operated by the independent Gaywood Cinemas Ltd. who also operated the Premier Cinema, Haringey.

By 1944 it had been re-named Rex Cinema and the seating capacity reduced to 720. In the early-1950’s it was taken over by Southan Morris (S.M. Super Cinemas Ltd.) who were soon taken over by the Newcastle-upon-Tyne based Essoldo Theatres chain, although the Rex retained it’s name and was never named Essoldo.

The Rex Cinema closed on 2nd May 1964 with James Stewart in “The Man From Laramie” and Alan Ladd in “The Red Beret”. It was converted into an independent bingo club which remained open until the mid-1970’s. The building was then demolished, together with the adjacent terrace houses to build new Council offices named Alexandra House. However the site of the auditorium was not built on and remains an empty lot used for car parking.

Close a theatre with a Jimmy Stewart movie or Alan Ladd.What a bummer.

What a way to go out.