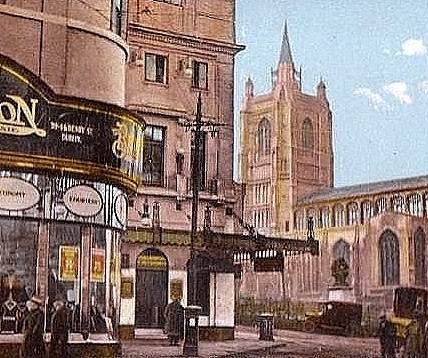 The Picture House opened on 18th February 1911 and it was a conversion of a former London & Provincial Bank building. Seating was provided on one floor.

In May 1921 it was closed for a major re-build and it re-opened on 12th December 1921 with an increased seating capacity of 1,687. The architect responsible for this was Francis Burdett Ward. The cinema had a restaurant attached.

On 4th February 1929 the Haymarket Picture House (as it had become known) became the sixth cinema in the UK to be equipped with ‘sound on disc’ equipment and it screened Al Jolson in “The Singing Fool”. In June 1930 it was taken over by the Denman Picture Houses/Gaumont British Theatres chain and in September 1931 a Compton 3Manual/7Rank organ was installed that was opened by Leslie James.

In around 1954 it was re-named Gaumont, but this didn’t last long as it was closed on 15th August 1959. The building was demolished and a retail store built on the site. The name ‘Gaumont’ was transferred to the Rank owned Carlton Cinema on All Saints Green.

A close-up of the entrance to the Haymarket Picture House taken in December 1949:
View link
Photographed as the Gaumont in June 1956:
View link