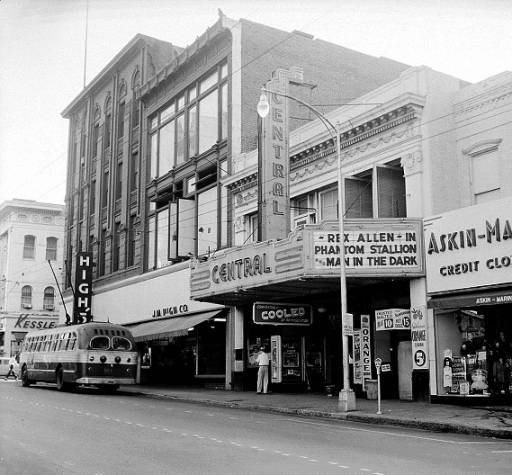 The Center Theatre was first listed in the 1937 edition of Film Daily Yearbook. It was renamed the Central Theatre in the early-1960’s after becoming acquired by the Bach movie theatre circuit. It went over to screening adult movies on October 15, 1962 and this programing continued until it closed in 1972.

I remember seeing this theater when my brother and I would ride the bus to see movies at other downtown theaters. What is funny about this theater toward the end of its existance was how it billed its movies. They would be billed as adult movies but were only second run movies.

I wish I had a chance to see how it looked inside.

The Central was definitely declasse. It’s essential tackiness was hard to ignore. It was a remnant of an earlier day when downtown Atlanta had second run movie houses, also including the Cameo. Still, in the late ‘50’s and early '60’s I did manage to see several programs of double feature horror movies there. The interior of the theater gave you the sense that it was the product of a bygone era. The foyer was rather shallow and the auditorium was rather narrow. Curiously enough, the ceiling was “ribbed”, which was quite unlike the other Atlanta theaters that I attended in those years.

The programming was exclusively exploitation pictures in those days. They often consisted of second tier features that other exhibitors had passed on. At other times they were second run double features of B movies. The “atmosphere” of the Central did not inhance the dubious pleasure of seeing some of these pictures.

In fact, in attending the Central one had the distinct sense of stepping down in the world. It came as no surprise that it converted to a policy of booking so called “Adult” films. So, I never paid any attention to it after that time.

The story goes that the change of policy was due to a change of ownership. Allegedly, the Central was acquired by a notorious Atlanta racketeer who dealt in pornography. So, all in all the closing and demolition of the Central was no great loss.

As I recall, the Central took over the Paramount’s programming policy when the latter was demolished in 1960 — thus the “Always Paramount in Pictures” on the marquee in the photo posting above. My cousin and I used to go to double feature horror films at the Central for a while, though neither the product nor the viewing environment was the same. Still, it was nice to know that the Central tried.

The Center (later Central opened the week of April 8, 1936

In 1964 and ‘65,I went to this theatre a few times. The marquee was gone, only the small “Always Paramount” sign remained. Past the boxoffice, through a door, it was not more than ten feet to the curtained entryway into the auditorium. There was no concessions stand, and the bathrooms were down in the basement, a place you would go only one time. Admission was $1.00. One typical feature would be “Great Escape” almost two years after release; the second would be a Russ Meyer film or similar.

The caption of the 1936 photo in Boxoffice that Tinseltoes linked to refers to this house as “…Louis Bach’s recently renovated Center Theatre….” It must have opened before 1936- probably quite a while before, if it needed renovating by then. Bach was apparently just the new operator. This is the item from the May 2, 1936, issue of The Film Daily:

“Atlanta — Sixth house in the Bach-Oldknow circuit here, the 500-seat Center, has been opened.”

My senior year at Grady High School (1966), Bestoink Dooley, whom hosted the horror movies on the TV, ran this as an “art house”, partially tits and ass stuff like “Nude in a White Car”, and partially Godard and screenings of Warhol’s avant-garde BIKE BOY and NUDE RESTAURANT, and later, more notoriously, LONESOME COWBOY, which was busted by the cops for obscenity: the theater turned out to be full of Atlanta’s elite, including some prominent lawyers, so not only were the charges dropped but the movie re-opened the next night to a full house. I begged to be let in and they agreed to let me stand up in the back. Viva came on the screen, topless I think, and began mouthing off and a cowboy said, “I heard that fucking retort” and half the audience got up and walked out (there was a steady exit procession of most of the rest as the film progressed) and I got a seat as expected.

As to the previous comment by “Hhhh” posted on 6/14/17, while the events may be accurate I believe that he has this location mixed up with another theater, or really two other theaters.

Bestoink Dooley, real name George Ellis, did run an art house in the mid to late 60’s, but it was the Festival on Walton Street. When he left it became the Gay Paree and it has this page on CT:

George moved out to Ansley Mall and took over the Ansley Mall Mini Cinema and renamed it Film Forum. This was the place the Lonesome Cowboy episode referred to above took place although that was still during its Mini Cinema days before Ellis took over. The solicitor had tipped off the news media about the raid and film of the people exiting the theater, clearly recognizable to anyone who knew them, was shown on the 11PM news that night. The Film Forum has this page on CT:

As to the theater on this page, the Central, I was never inside. I did walk past it several times on the way to the Citizens Jewelry Company next door. In those pre Best Buy days, Citizens was the place to go for electronics at prices that beat Rich’s and Davison’s. I came to Atlanta in 1967 and by that time the programming here was as described by Jesse Brantley in the first comment on this page.

All this talk about this theater, Bestoink Dooley, is making me long for the good old days that much more.