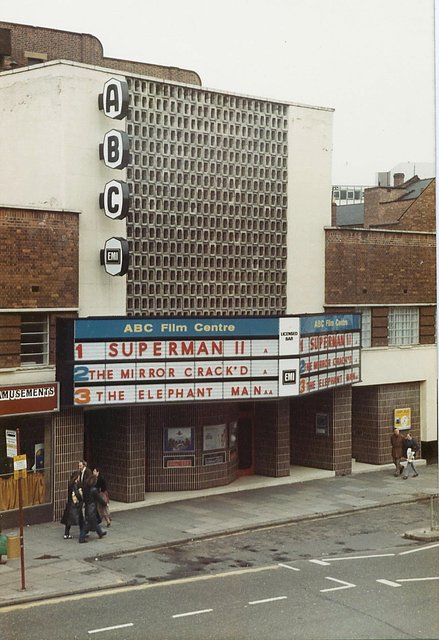 The Savoy Cinema was built for and operated by the Associated British Cinemas chain(ABC), and opened on 4th June 1937 with John Lodge in “Sensation”. It was designed in an Art Deco style by ABC’s in-house architect William R. Glen with further input from C. Wilford Smith. The cinema was equipped with a Compton 3Manual/6Rank organ which had an illuminated console and a Melotone attached. It was opened by Wilfred Southworth. There was a small stage and dressing rooms which was used in the early days and in the 1960’s pop concerts were held. In 1959 the Savoy Cinema was equipped with Todd A-O and 70mm projection and it had a long run with a Roadshow presentation of “South Pacific”.

ABC were taken over by EMI and then Cannon and it was re-named Cannon Film Centre. In 1991 Cannon were no long in charge and the name changed again to MGM and finally back to ABC. It closed on 16th January 1997 with a screening of “Star Trek-First Contact”. It then remained closed and boarded up. In March 2006 plans were approved to demolish the building and build a ten-storey apartment block, 100 bedroom hotel, casino and shops on the site.

In 2007, the bulldozers moved in and by the end of the year, the former Savoy Cinema was no more. In August 2010, the site is an empty plot, used for car-parking.

I would like to correct a small mistake in the details above.I worked at the cinema from 1965 to closure and when converted to a twin cinema,the whole of the stalls area was used for screen 2.
Demolition was completed toward the end of 2007 and at time of writing(march ‘08),the area is in use as a car park.
I would love to add some photos when this feature is up and running.

alanproj; Thanks for the clarification. It has now been amended.

Heres a photo from my collection.

I worked there in the 90s.Great to see Alan’s pics with Ian the last Chief Projectionist. Great cinema to work in,pity i was not able to run 70mm there. Bill

I served my appreticeship in Leicester from 1961 to 1966 and this was my absolute favourite cinema. I was fortunate enough to hear the organ played by Clifford Birchall as a prelude to the film “Can-Can” in 1961 – perhaps the last time it was played in public. The instrument was not very loud (at least not in the balcony) and I began to wonder if it was installed out in the car park! To be fair though, it could just have been that Mr Birchall was being restrained, so as not to drive out the non-organ lovers.

Thanks MikeJC for jolting a memory. I worked with Clifford Birchall (He was one of the better ABC organists) for just over 14 days at the Imperial Walsall. We both had got lumbered for the Bingo Opening… He composed a famous march. But cannot for the life remember the name.. Our Zone Manager L.S. Barry was based here.. Lucky I did not have to releive at this Cinema :o)

I was surprised to read that the cinema was used for pop concerts in the 60’s. As Assistant Manager there between November 1963 and October 1969 I have no recollection of any stage presentations there, however I do recall pop concerts at the other ABC Trocadero in Leicester during the 60’s.

Hi Ian. Hope you’re keeping well. I recall Doug Sanders telling me that there had been live shows at the ABC. Also there were a couple of rooms back stage on the actors left (below the organ chamber rooms) that Bill Croft used as store rooms,that I was told used to be changing rooms(there was also a toilet on the same floor. Alan

Hi Alan, Just spotted your posting from last year! Don’t know if you go to the cinema now but if you do I have strong views on presentation. You can always email me : ijdrummond @hotmail.com Ian

A memory from when I lived in the area in the 1960s. When 70mm was installed, the back six rows of the stalls could not be used because you couldn’t see the top of the screen as it was cut off by the front of the circle. I once went to a Saturday kids' matinee of ‘War Games’ in 70mm. The 70mm was great but the kids running around was a nuisance. I saw many other 70mm stuff there.