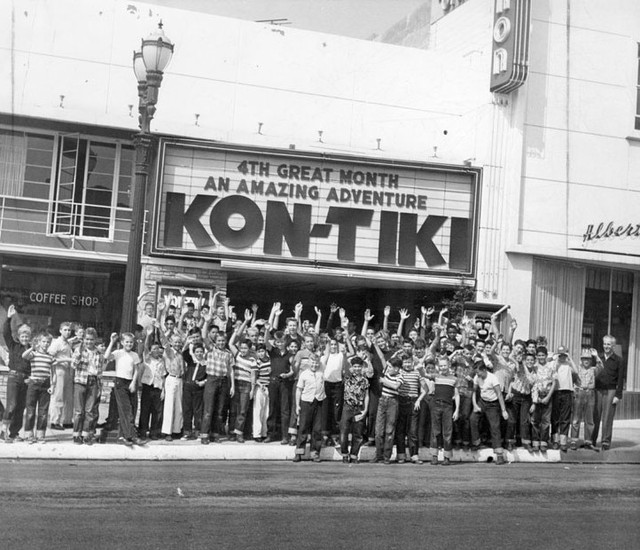 The Beverly Canon Theatre was located a half block from where the Warner Beverly Hills Theatre sat (now a parking lot). It was also around the corner from the Beverly Theatre on North Beverly Drive. It ran revival films for several years. It was used as a small stage theatre name Solari Theatre from January 5, 1977 until March 28, 2004. It was demolished in September 2005.

“When CBS premiered ‘The Wild Bunch’, director Sam Peckinpah became so angry at how his film was butchered he scheduled a single, free screening of the uncut European version at this theater. When he arrived with the print, the crowd cheered.

Inside, upon meeting Peckinpah, I told him this was my favorite film and I had seen it many times. He replied “Well, now you’ll see the film I made!”

Also there were Warren Oates, Strother Martin (who remembered me from a previous meeting) and L.Q. Jones. It was a wonderful afternoon."

I saw lots of film noir at the Beverly Canon during the early 1970’s. I particularly remember seeing ‘The Big Sleep’, ‘The Maltese Falcon’, and several other Bogart films here.

At the Beverly Canon, Harvey was responsible for, among other things, showing an uncut version of [i]The Wild Bunch[i].

The November 2, 1946, issue of Boxoffice said that the opening of the Hitching Post Theatre in Beverly Hills had been postponed from November 8 to November 22. The building was apparently new, as the item gave its cost as a quarter of a million dollars.

This being Beverly Hills, the grand opening didn’t lack for celebrities. Among those attending were Roy Rogers, Dale Evans, and Trigger, as well as lesser luminaries such as Glenn Ford and Eleanor Powell. Trigger’s hoof-prints were immortalized in cement as part of the festivities. There are photos in the December 7, 1943 issue of Boxoffice.

The January 25, 1947, issue of Boxoffice said that the Hitching Post Theatre in Beverly Hills was adopting a newsreel policy to be in effect Mondays through Thursdays, but would continue to show western movies on Fridays, Saturdays, and Sundays. It would be the first newsreel operation in the Los Angeles area outside downtown and Hollywood.

The owners of the house, ABC Theatres (which I was a local partnership consisting of Buddy Adler, Horace Boos, and Gregory Carter, and was not related to the later nation-wide ABC circuit) renamed the house the Beverly Canon Theatre and switched its policy to single features and short subjects with newsreels in 1947, according to Boxoffice of April 19 that year. For a time, the theater continued to run two daytime shows of westerns for the local moppets on Saturdays and Sundays. Later Boxoffice items reveal that the Beverly Canon had gone to an art house policy by 1949.

ABC converted their Hitching Post in Hollywood into the art film Paris Theatre in late 1949. Their Santa Monica Hitching Post continued to run westerns for only a few months after the last of its companion theaters went highbrow on it, then after a brief closure was reopened as the Riviera Theatre, another art house.

I discovered the Beverly Canon when walking around there in summer of 1974. I guess it was a repertory house by then, because I saw “The Big Sleep” and something else in a double feature. I loved eating frequently at the little cafe next door — which may have been called Beverly Canon Cafe, not sure now.

This theater would’ve been 70 years old this coming Saturday.