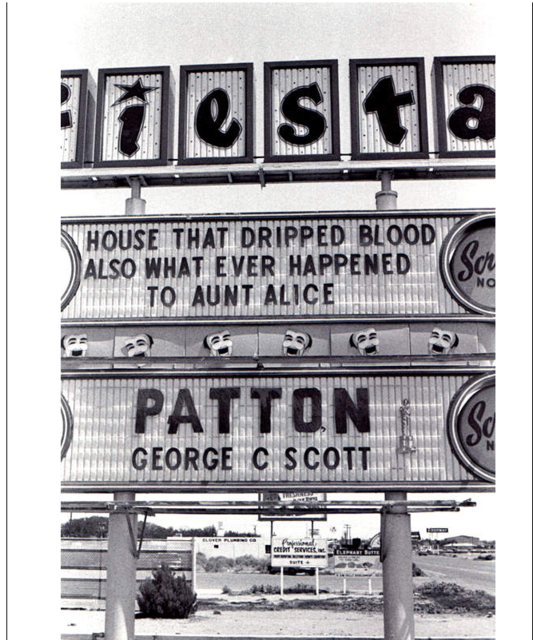 The Organ Drive-In (named for the nearby Organ Mountains to the east of Las Cruces) was located just off S. Main Street on Wyatt Drive. It was opened August 20, 1948 with “Frontier Gal” and a capacity for 600 cars. On January 16, 1955 it was renamed Fiesta Drive-In and in the early-1960’s a second screen was added. It was still open in February 1981, but was later razed for a shopping center.

Frank, found a little info,THE ORGAN drive-in held 375 cars and was owned in 1956 by LUIS Maynez.

The Organ Drive-In began owned by Homer Rowington of the El Paso Amusement Company with spots for just under 600 cars on El Paseo Road. The theater launched September 20, 1948 with the film, “Frontier Gal.” The theater was going to operate year-round but closed in late November re-opening in the March 1949 season though operating year-round thereafter.

Boxoffice, Feb. 13, 1967: “Video Theatres has purchased the Fiesta Drive-In at Las Cruces, N. M., from U. A. Kane, who had operated it and the former Rocket Drive-In there for many years. Kane now will concentrate on his two drive-ins in El Paso, Tex.”

The Las Cruces Sun-News announced on Aug. 19, 1948, the the Organ would open that night, but they were still working on the grill. The same grand opening ad ran again on Aug. 20, and the newspaper said that night would be the Organ’s premiere, so that was probably right.

When it opened the Organ had “modern central sound equipment, the same which is now used in Radio City Music Hall.” The type of loudspeaker was somehow “a recent development for the benefit of drive-in theaters, allows patrons to hear just as well with the car windows rolled up as when they are down.” (Huh?)

Predictably, it took less than a year for owner Homer Foster Bowington to announce he was installing RCA in-car speakers. After a couple of months of “coming soon” notes, the speakers were first advertised on Aug. 7, 1949.

The Organ closed for remodeling after the Nov. 3, 1954 shows, then reopened as the Fiesta on Jan. 16, 1955. Its second screen was added between July 1962 and September 1965, a Sun-News coverage gap at Newspapers.com. Video Independent Theaters bought the Aggie and the Fiesta in early 1967.

The local college student newspaper, the Round-Up, reported in February 1981 that Video’s local manager said that unlike in the big cities, “more people are going to the movies here than ever before.” The Fiesta (along with the Aggie) was still going strong at that point, and that’s the last I know about it.