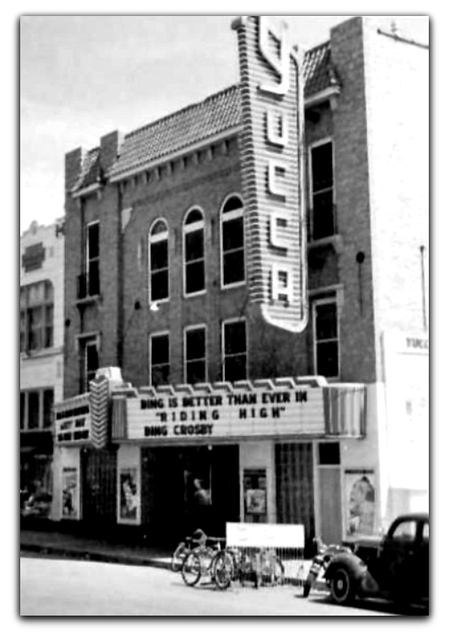 Here is an April 1937 court case. I took out all the legal arglebargle.

Appellees were charged with violating Ordinance 397, Section 3, of the Municipal Ordinances of Roswell, in permitting a lottery device to be conducted in the place of business operated by the appellees. The place of business is the Yucca Theatre, owned by R. C. Griffiths Theatres, Inc., and the alleged lottery device is what is commonly known as “Bank Night.” In the police magistrate’s court the appellees were found guilty and fined $ 25 each. They appealed to the district court where the cause was tried de novo. The district court ruled that:

The device complained of does not constitute a lottery device in that the participants in ‘Bank Night’ pay nothing to either register or participate in the drawing, it being equally free to those who do not even purchase a ticket as to those who do purchase a ticket, there being no consideration for the chance to win, and as a conclusion the court finds no violation of the ordinance."

The spirit of gambling, the squandering of savings, the evils aimed at by our lottery statute, can no more be found in “Bank Night” than can be found in the numerous advertising schemes seen daily where thousands of dollars are given away as prizes to “slogan coiners” or “lucky guessers” who send to the manufacturer a wrapper from a can of soup or bar of soap.

Although signing one’s name in a book or appearing at the theatre within five minutes of the time of the drawing might be regarded as consideration, it cannot be called “pay” without warping the word out of all recognition. It clearly is not a game of hazard in which small sums of money are ventured for the chance of obtaining a larger value in money or other articles."

For the reasons given, the judgment of the trial court will be sustained.

It is so ordered.

Bob Throopo—The Plains had no balcony, so the movie must have been at the Yucca, which did.

Mister Throop (sorry for the typo before). You’re welcome. I love to talk about these theatres. It brings back my youth.

From 1950 a view of the Yucca Theater from Roswell New Mexico.

The Yucca Theatre was set to open on April 17, 1931, according to the previous day’s issue of the Roswell Daily Record. The house was built for Griffith Amusement Company. An article in the December 30, 1930, issue of the Pampa Sunday News Post about the opening of the La Nora Theatre in Pampa, Texas, said that the Griffith theater then under construction in Roswell had been designed by the La Nora’s architect, Gates Corgan.

The Plains Theatre, 1975. “The 7th Voyage Of Sinbad”(1958), …a Re-Release! A new print! A classic film! At that time, the last of the old theatres in Roswell to run FILM,was “plum tuckered out”; now a museum…..I also remember “The Yucca Theatre”, off of the main drag,: it was just sitting empty, looking like a lost child wondering why it wasn’t open and showing “House on Haunted Hill”, or another title equally memorable jumping off the screen for the Saturday Kid’s matinee!

My family moved from Grand Prairie, Texas, to Roswell in April of 1946 to be near my father who was hospitalized there for a work-related accident. (He was a telephone lineman.) I was eight. My mother and I took rooms right behind the Yucca Theatre, which was showing “Two Sisters from Boston.” We lived back and forth between Roswell and Clovis for the next eight years, finally settling permanently in Roswell in 1954. In my senior year of high school, I was an usher for the Griffith Theatres (Plains, Yucca, Pecos, and Chief). My memories of theatres in Clovis and Roswell in the 1950s are at http://robertpatrickpersonal.wordpress.com/2012/08/13/new-mexico-movie-houses-of-my-youth/ I would welcome comments or memories about these theatres from anyone else my age.