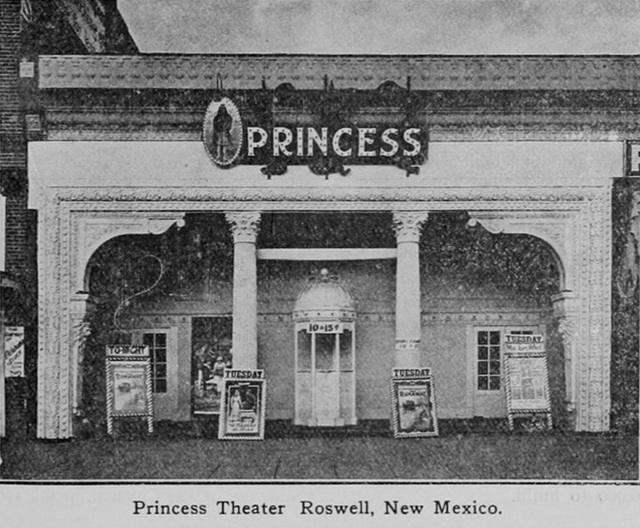 Opened as the Princess Theatre on July 28, 1913. It was later renamed Liberty Theatre. By 1941 it had been renamed Pecos Theatre. It was closed in summer of 1956.

It appears that a wine shop currently operates in the former Pecos Theatre.

Apparently the Pecos was, back in the silent days, called both the Liberty and The Princess. There seems to be some confusion as to which name was first.

I have a bad Xerox copy of a small photo of it as The Princess labeled 1917, with posters for a 1917 movie called “The Runaway.” On this photo is the caption, “Previously The Liberty,” but I have another poor Xerox copy of a large photo of it as The Liberty, labeled 1919, with posters for “The Shepherd of the Hills,” a 1919 release, and a poster for a matinee of “When a Man loves” starring Earle Williams, also 1919. So it can’t have been The Liberty first.

Interesting design note: The Princess Theater seems to have as its emblem a painting of a Native American princess (although the poor imaging makes this speculative), while The Liberty flaunts a rather large replica of The Statue of Liberty (and also an arrangement of lights and a big star which make me suspect the photo was taken at Xmas time).

Both photos show a fancy arched facade (mixed Greek, Roman, and perhaps Arab and/or Rococo elements of design). The Princess has a plain architrave above the fancy arch, but the Liberty has nude fairy and Cupid scultures and other ornaments on the architrave.

The Princess' sign (which looks as if it might contain small light-bulbs within each letter) is on the architrave, while the Liberty’s sign and statue are on top of the flat-roofed building. A strip of fancy ornament above the Prncess' sign has been replaced in the Liberty pic by a plain stretch of masonry or plaster.

North of the Liberty is a three-story clothing store caled “Duffy’s For Men.” South of it is a cut-off sign reading “French & Dau—–” “Insurance-Real Es—–”

If you would like to see these VERY POOR images, please e-mail me at

NOTE: I can no longer find the images of the Princess and Liberty theatres I mentioned in my last note. Sorry.

This house was called the Princess before it was called the Liberty. The February 21, 1914, issue of The Moving Picture World said that the Princess Theatre in Roswell had been opened on July 28, 1913. The house had 725 seats. The building was 35x155 feet, and the projector had a throw of 92 feet to a screen which was 13x18 feet. The house employed a three-piece orchestra, and could present live events on a stage that was 23 feet wide and 18 feet deep. The owner of the Princess was James Halper, and the manager was G. W. Morgan.

The name change from Princess Theatre to Pecos Theatre happened between 1936 & 1937. I’ve add photos from both years, and the change was done between them. 1936 photo as Princess Theatre added credit Palace of the Governors Photo Archives, Negative# 183377. May 29, 1937 photo as Pecos Theatre added credit G. Redfield. Negative Number 052027, Palace of the Governors Photo Archives.