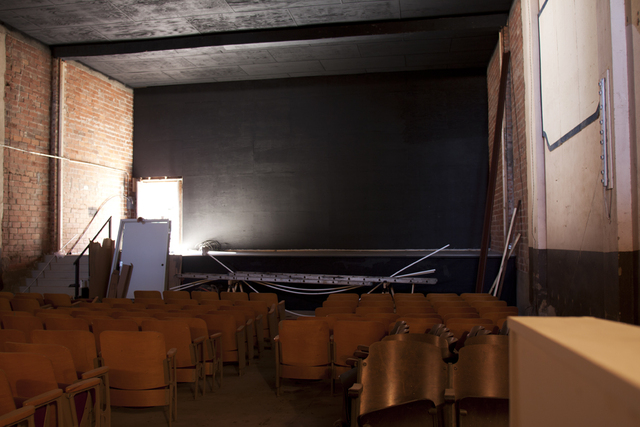 Built in 1927 in the heart of Brady, the 450-seat Palace Theatre was part of McCulloch County’s cultural heritage for twenty-eight years. It was here that many people experienced their first movie and some, perhaps, their first kiss. Closed since 1955, it became a jewelry store. Later the empty structure was both a silent reminder of “what used to be” and a symbol of the transformation of the downtown area that has already begun.

The Palace Theatre was reopened February 28, 2014 with a screening of “The Monuments Men”.

From what I could see when I stopped by last month and on their Facebook page, the Palace Theatre will soon be reopened.

This theatre has recently reopened after considerable effort on the part of local volunteers. On Feb 28, 2014, they showed the first movie in Brady since 1955 when the theatre closed. So, in essence, The Palace Theatre has been closed LONGER than it was an operating venue.

They have the very latest digital technology installed and can now seat 176 persons. There is an active Facebook page – Palace Theater Brady, Texas.

Downtown Brady had three movie houses in operation as late as 1954. The March 13 issue of Boxoffice reported that Kay Caywood, manager of all three houses, had changed their hours of operation. The Brady Theatre would now open at 1:00 pm daily except Saturday when it would open at 12:00 noon. The Texas Theatre and Palace Theatre would open at 5:30 pm Monday through Friday, 12:00 noon on Saturday, and 1:00 pm on Sunday.

The Palace might have closed in 1955, but the Texas and the Brady continued to operate for many years, so it isn’t true that the first movie shown in Brady since 1955 was at the re-opened Palace in 2014.