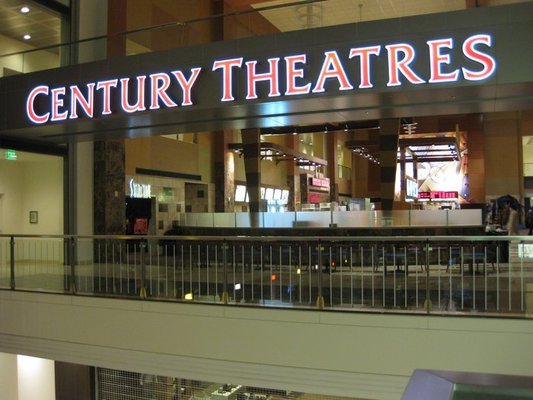 The Century San Francisco Center was also the last of several multiplex projects designed for the Century chain by the San Diego architectural firm Fehlman LaBarre (partial list from Reed Construction Data. The page for this project mistakenly gives the address as 1835 Market Street.)

The Fehlman LaBarre web site used to have information about their theater projects, but the domain name was allowed to lapse and it’s now a spam site, so avoid it. Partner Mark Fehlman has retired from architecture to pursue a career as an artist, and partner Michael LaBarre has merged his practice with San Diego firm Carrier Johnson + CULTURE.

A recent trip to the Century 9 was most fun. I went into the XD Theatre and found the best curved screen in San Francisco. It’s huge and curved at the top and bottom. This screen is so popular they are adding a second one on the other side on the right section. They even cut a hole in the lobby for the left side exit from Theatre#1. I am told It will even be larger and with Dolby Atmos sound this may be the best place in SF to check out a movie on a giant curved screen in SF. They hope to be open with the new XD GIANT screen for Gatsby in 3-D next week. The theatres at the 9 complex near the cable car area of SF have the height to put in this giant screen.

Today we checked out the brand new EX screen they just put into Theatre#1 and watched Gatsby in 3-D. Such a shame they did not put in the same type of curved EX screen they had in their first EX screen in Theatre#6 The new one is not that curved at the top or bottom and seems smaller then the one across the lobby. At least Theatre#1 has the first install of the Dolby Atmos sound system and sounded hot. Like all Cinemark/Century EX screens when you watch a scope print you will have boring white screen at the top and bottom of the giant square white/silver screen. No masking has been put in at the top or bottom. I don’t know who goes into these multiplex theatres to re do them but in the Century 9 in the new EX #1 cinema they have bright WHITE lights on the side and set to close to the big screen so when the pre show and previews are on the whole screen is washed out with bright white lights leaking on the screen. Does anyone think these days about putting a color lamp in like blue and haveing a shield in the first set of side lights close to the screen.

Sorry the name brand at Century is XD. Not EX.

Went there recently but could not find it. Very well hidden. No sign or marquee in sight. Asked a couple of people and they didn’t know either. I hear it’s on the 5th floor of some building on Market St.

The current name of the shopping center is Westfield San Francisco Centre. The theatre’s address on their website is 845 Market. On Fandango the address is listed as 845 Market #500.

Exterior and lobby photos from July 2015