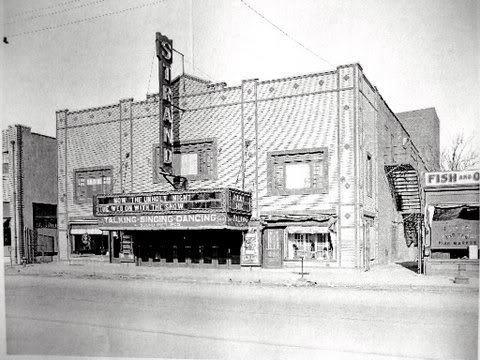 Opened June 8, 1922, the Strand Theatre was Rockville Centre’s first theatre of any consequence, and presented plays and vaudeville, as well as movies, before being eclipsed in 1929 by the more modern and lavish Century’s Fantasy Theatre. The Century Theaters circuit eventually took over the Strand Theatre as well, reduced the seating capacity to about 1,400, and ran the theatre until closure in the 1950’s.

Here’s a link to Warren’s vintage image of the Strand. I wish it were a larger image.

When I ssw the Strand, many years later, there was no vertical. The marquee was one of those modern boxy ones and the name was in neon. I seem to recall the Lefferts being that way. It’s something for this theatre you can get the old but not the new. I’ve been trying to get the old for the Bellerose but only the new seems to be out there. Also, Warren had a photo of Century’s Huntington Station, poor and from a book. Did he pass that along to you?

If anyone is familiar with the area, the site of this theater is now a parking lot adjacent to the Sleepy’s showroom on Sunrise Highway. The Sleepy’s building looks quite similar to the old Strand building, in fact, and for a time I thought it might have been an adaptive re-use of the old building… but if you look at the vintage pic, you can see a piece of the Sleepy’s building at the far left of the image.

Rob… Warren didn’t really pass anything along to me. When I found an image of his that I though I might like to hold on to, I’d ask his permission to copy it into my photobucket account, but that was about the extent of our image-sharing relationship. Warren would often rotate images in and out of his own photobucket account, due largely to storage-space issues, I think. Many of his links are now broken due merely to his having removed the images from his scrapbook to make space for others.

By the way, here’s a look at what the Sleepy’s looked like just a few years ago in 2007. Seems they streamlined the facade a bit further since then, judging from the current street view, removing the peak from the center of the parapet wall.

June 8th to be specific.

Two photos circa 1930 added. The distance shot is from the Archives of the Rockville Centre Public Library. The frontal was originally posted by Warren Harris and subsequent relinked by Ed Solero.

The following is the description of the Strand from the Archives of the Rockville Centre Public Library: “The Strand Theatre stood on the north side of Sunrise Highway between Park and Village Avenues. It had 1,035 seats, an organ, mushroom ventilation (the forerunner of air conditioning), large dressing rooms and large aisles. It opened on June 8, 1922 and offered both vaudeville shows and motion pictures.

According to local lore, boys would scrape together 10 cents for one admission. One boy would go in and open the fire exit in the balcony (which was not alarmed) to allow in his buddies.

I belong to the Odd Fellows Lodge in RVC and when they demolished the theatre, they donated the seats to our lodge and they were used by our members for many years. We still have many of them in our attic. A photo was uploaded to the photo section.