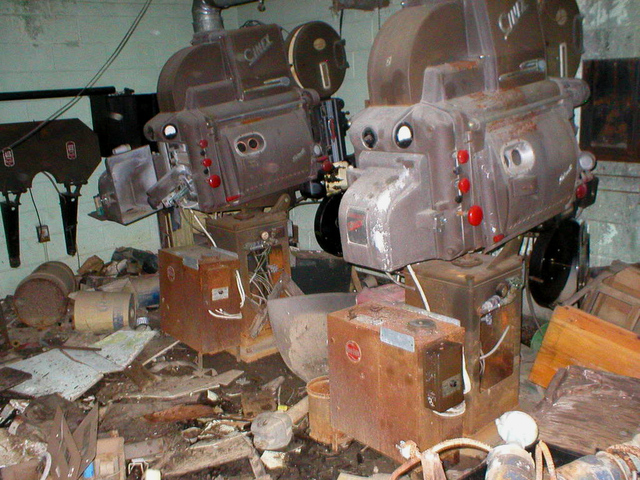 An inexpensive drive-in with a good snack bar. The Moonlite Drive-In was opened in 1951. By 1955 it was operated by James Rizzo & Milgram Theaters. It closed in 1988. It is due to be reopened in June 2019, but that deadline passed due to a lack of permits, which had been approved by August 2019. It reopened October 4, 2019

After being closed for 32 years, Exeter resident Eric Symeon plans to reopen the Moonlite Drive-In in West Wyoming in June Symeon recently flew to the closed Cascade Drive-In in Chicago and purchased a digital projector. He learned about the projector for sale after reading an article that the Chicago drive-in would close after 58 years in business.

He said he looks forward to re-opening the theater in West Wyoming to offer families in the area something to do and a fun night out for a reasonable price. The cost to see two outdoor movies at the Moonlight Drive-In is $8 for adults and $5 for children. Work is ongoing to reopen the concessions stand and Symeon said some electrical work still needs to be completed as well. Symeon purchased the Moonlite Drive-In in 2017 and the Luzerne County Zoning Board granted him a variance to operate the theater. Last summer, he said a missing panel was replaced on the movie screen and the screen was repainted. He posted a photo of the digital projector on Facebook and the post received more than 700 “likes.” Several people posted that they can’t wait for the drive-in to re-open.

The Circle Drive-In, built in 1945, is one of the longest running drive-in theaters in America. It is open for the season and will play movies “Dumbo” and “Captain Marvel” on one screen and “Wonder Park” and “Pet Sematary” on another screen this weekend. Movies are shown Friday, Saturday and Sunday nights.

The Garden Drive-In announced on its Facebook page it will begin showing movies this Friday and will hold its first flea market for the season on Sunday. The movies showing this weekend were not yet announced.

The Gardens Amusement Co. built the Garden Drive-In, which opened in July 1952, and it remains in business more than 66 years later. Kim Barbacci’s family bought the drive-in in the 1980s from the Cragle family.

The Laurel Drive-In in Hazleton temporarily closed last season because while other drive-ins have gone digital, it has continued to use 35mm film. It’s not clear if the drive-in will reopen this season. Efforts to reach anyone at the drive-in were not successful on Monday.

That great news, that a former Cascade projector will enable the Moonlite to reopen this June, is from an April 9, 2019 article by Denise Allabaugh in The Citizens Voice. There’s a nice image gallery there including close-ups of the unrestored marquee.

That Citizens' Voice story said that the Moonlite had been closed for 32 years, which would mean that it closed in 1987.

When did it open? So far, my guess is 1951. The Moonlite’s first Theatre Almanac appearance was in the 1952 edition, exec: James Rizzo.

Looks like it will be a beautiful theater again.

I saw a story on a facebook group (cant remember the name) that this theatre is scheduled to open this weekend Oct 4.

Wishing The Moonlite Di The Best for their Opening Weekend!

hope somebody can get some current pictures of the theater when it opens!

Congrats to the owners of the Moonlite for bringing it back to life! Being a Pennsylvanian (from Pittsburgh), the Moonlite is now one of three drive-ins in my home state that I have to visit for the first time, the others being the Sky Vu in Gratz and the Mahoning in Lehighton. Come next spring, I’m going to plan a road trip to visit all three during the summer.