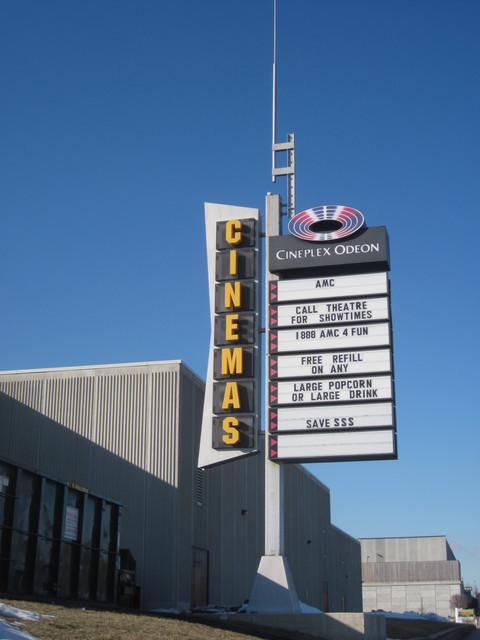 I don’t have much information on this theatre. It was originally operated by Cineplex-Odeon and named Hodgkins Cinema, opening on December 19, 1997. If you are travelling along the Stevenson Expressway (I-55), you’ll see a watertank bearing the C-O logo and the Hodgkins Cinema name.

At one point, the theatre took on its present name, the Quarry Cinema, and passed from Cineplex-Odeon to Loews to AMC. It closely resembles the ICE Chatham, the ICE Lawndale, and the ICE 62nd & Western Cinemas, so perhaps it was built around the time that those were.

This theater now has a digital LIEMAX screen that AMC keeps putting up. Since the auditoriums (before LIEMAX) held approx 140-290, I imagine the screen holds no more that 220-230 people tops.

And you get to pay up to $14 dollars for the scam too!

This cineplex opened around 1995, if my memory serves me correctly. It was around the same time the Quarry shopping center opened. I believe the first movie we saw there was “Disclosure”. This was a beautiful cineplex when it opened. My wife and I used to drive from the North end of Berwyn (several miles away) just to see movies here. We moved to Hodgkins in 2003 We’re within walking distance of the theatre now. Sadly, the theatre looks like it’s from the mid ‘90’s (which wasn’t a good era for commercial architecture, in my opinion). The facade, and interior look dated, and they don’t use the margue on East ave. anymore (except to advertise food and drink specials). Overall, it’s still a nice place, but not as nice as some of the more modern theatres farther west of it.

Hi, I work at the Quarry. If there’s anything you can suggest that help us improve the place, I’m happy to take your suggestions. Since I’m here, I’ll help settle some confusion.

Our address is indeed 9201 W 63rd St, Hodgkins, IL 60525. Its proximity to Countryside tends to confuse some people and online maps. You can get to us by taking 63rd st off Lagrange Ave or East Ave.

I’ve asked corporate to fix the branding several times in the last few years. The new CEO’s making changes, so hopefully we won’t have to go another year advertising “Cineplex Odeon”. Right now the only thing that says we’re an AMC is the sign on Lagrange/63rd and “AMC” letters on our back marquee. The marquee that says “Cineplex Odeon”. Fun stuff.

I have to respectfully disagree with Mindhunter55 on the status of the theatre since 2007. I’ve been here a few years now and I feel that conditions have done nothing but improve since 2007. Standards were elevated, the employees are a lot happier, and guest satisfaction and attendance have remained pretty constant, especially considering how theatres on a whole have declined in satisfaction in the home theater age.

CinemarkFan is a little harsh, but fair. Yes, the IMAX screen is not a large format screen, nor do we claim it is. No-one here likes IMAX’s decision to not differentiate between their several screen sizes or ratios. The employees are trained to know that the IMAX screen is 30% larger than our other large screens. At fifty feet wide it does encompass the whole front wall of the theatre. This info, and the differences between the IMAX 3D and RealD 3D theatres, is displayed at the box offices and guest services for the guests' information. We make no bones about the fact that the screen isn’t as big as a large format screen – if people ask if it’s a “full-size” or “regular” IMAX screen (themselves misnomers), we tell them about the differences.

Mind you, people don’t seem to mind, surprisingly. We opened it in October and I was worried we’d get a deluge of complaints when we opened a “Liemax”, but people really enjoy it. I’ve had two complaints about the size – once for “This Is It”, once for “Avatar”. Maybe it’s a case of savvy moviewatchers being more informed. At any rate, the only real source of complaints we get is about the glasses, and how we have to take them back at the end of the show. Since RealD uses disposable one-size glasses, most people assume they can keep the IMAX ones too.

As for the cost manadated by IMAX, we don’t find that particularly fair, at least for the up-rezzed 35mm shows. The 3D IMAX, however, is only a buck more than seeing a RealD show in our normal-sized theater.

Hopefully some of CT’s readers will give Quarry another look. We’d love to have you.

I go there about twice a month. I agree, they need to spice it up a bit. The facilities are clean and nice. The staff is great but it has this empty feel to it in the lobby. I still like going there.

Another on time Loews to add to my list.

You are going to RUN out of ROOM.LOL.

I go to this theater most often. I have no complaints with it. Nice theater. Close to home. I like coming in from the East Ave entrance. Much easier to find. And if your in the area there’s a reataurant worth checking out called Buck’s Pit Stop.

This opened on December 19th, 1997. The grand opening ad can be found in the photo section.