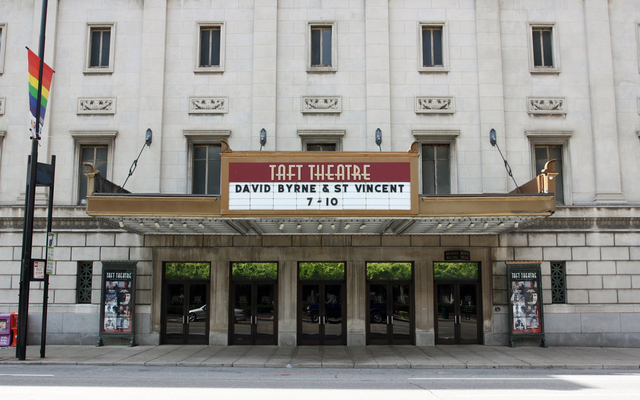 The UFA Theater was built within the Taft Theatre complex in 1931 by local architect Harry Hake as a movie house to show only German films for the large German population of Cincinnati. There are three auditoria within the Taft Theatre complex; a general auditorium for the public which has housed legit touring road shows since its inception in 1928. At the same site also in 1928 was constructed the Shrine Temple for use by the Masonic Order of Cincinnati and seats more than 2,000. The Taft Theatre seats about 2,500. All three of these theaters are located at 317 East Fifth Street.

The UFA Theatre operated without a hitch until we got ourselves involved with the Second World War at which point the UFA changed its name to Mayfair Hall and began to screen American travelogues and art films, ceasing its connection to the German film studio Universum Film Aktiengesellschaft.

Today, Mayfair Hall still exists but does not show films, as it is used a meeting hall one can rent and even an occasional wedding is performed there.

On January 7,1940 the ad for the Mayfair Cinema listed a film called,“Stolen Life”, starring a Ms. Bergner and a Mr. M.Redgrave. Unusually mentioned in the advert for this British flick was an offer of free coffee and cigarettes being served to the cinemas patrons in the lobby. Since WW2 had not begun for America there wasn’t any rationing of these staples,yet.

The U .F .A Studio in Germany would have been equal to Hollywood’s M.G.M.,. It did in fact have connections to Louis Mayer the President of M.G.M. for distribution rights to their product as well as displaying films made in Germany for as long as the market remained friendly. Remember the early days of filmdom were silent, so films made anywhere could play to peoples in many languages. Changing title cards into another language was a common occurance, thus when we entered WW1 and WW2 a huge revenue loss was felt amongst our U.S. studios in those countries we were warring against.

They are about to reopen the former Rathskeller which was used when UFA screened films,it is located under the Taft Th. and it is to be used for musical events. Earlier it saw use as an exibition space for auto shows. It contains the restrooms for the Taft Th. as well.

The Rathskellar is not the same area as where the UFA or Mayfair Hall operated.Mayfair Hall still exists on the first floor next to a present exit coridor.