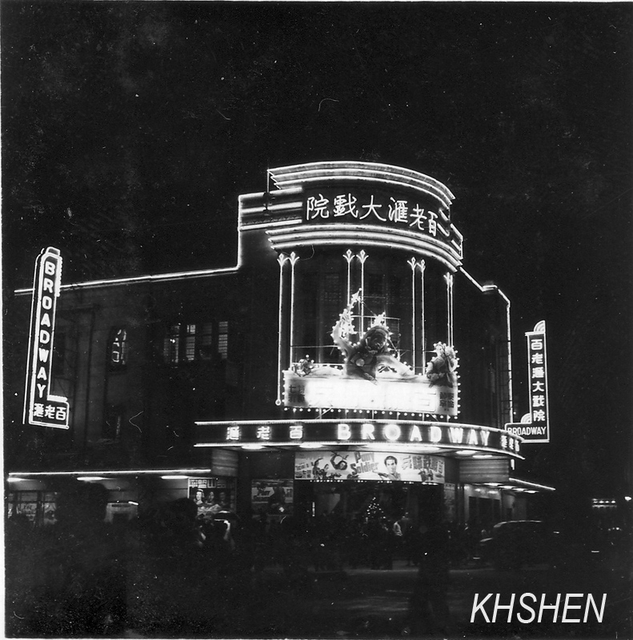 The Broadway Theatre was the first deluxe theatre to be built on the Kowloon side of Hong Kong after the end of Word War II. Located in the Mongkok district, it opened to business on 24th July,1949 with Dan Dailey in “Give My Regards to Broadway”. According to news reports, it was owned by the Henry G. Leong Estates, Messrs. Chau and Lee were the architects and Man On and Co. the contractors.

An advertisement for the theatre said that:
“The most modern and up-to-date cinema in Kowloon. Offering the best in comfort, sound and projection equipment. Latest air-conditioning installed for your complete enjoyment”.

A cafeteria on the ground and first floor of the theatre building opened simultaneously with the theatre.

The first Cinemascope film “The Robe” to be shown in Hong Kong was premiered at this theatre, as well as Roxy Theatre on Hong Kong Island on 24th December 1953.

It closed its doors on 15th February 1966, and the final film was a Mandarin language kung-fu film.

An office block was built on the site of the theatre.

The Broadway Theatre was located on the southwest corner of Nathan Road and Mong Kok (or was it Argyle Street?). It was a popular theatre and showed mostly “20th Century Fox” films. In the early 1960s, tickets were selling for $1.50 (front), $1.70 (further back), and $2.40 (upper level).

“The Robe”. Oh yes, I remember the time when this movie was screened at the Broadway theatre; its Chinese title – shing po chen chui (holy garment a thousand autumns(?)). The painters in those days were very artistic and their 1-storey high painting outside the theatre wall showed two armed Romans, one ready to strike with his sword and the other getting ready to duck.

Picture of the Broadway showing The Magnificent Seven (1960)
http://gwulo.com/node/1310

Thanks Pierre27’s picture. That is absolutely magnificent! The site is now HSBC Kowloon Head Quarter.

Its Chinese name is 百老匯戲院.