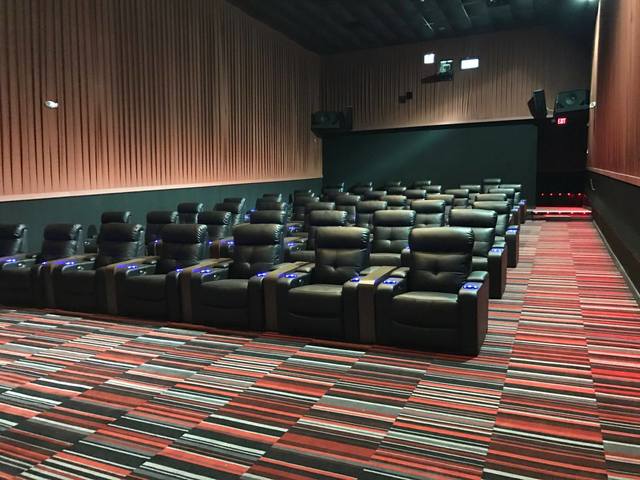 Located in the Middlebrook Shopping Center. This opened October 21, 1994. Operated by Clearview Cinemas, in June 2013, it was taken over by Bow-Tie Cinemas when they took most Clearview locations. They closed the Middlebrook Galleria Cinemas on October 24, 2014. It was reopened by Cine-Grand in November 2014. It was closed for renovations in April 2016 and reopened January 20, 2017. It had closed by March 2019.

Yesterday on their facebook page they posted that they are accepting applications this Thursday and Friday. The reopening cant be far behind.

That is good news.

Here’s the text of the WordOnTheShore article posted by fred1 on October 17, 2016:

OCEAN TOWNSHIP: The town’s movie theater will definitely be reopening…but exactly when is anybody’s guess.

Cine Grand Middlebrook, a movie theater located at 1502 Route 35 in Ocean Township, is currently closed for renovations and has been since February.

After months of seeing no work being done at the site and no updates from the theater’s Facebook page, a post was made yesterday.

“We are aware that this project has taken longer than hoped for,” the post states. “However, we find it in the best interests of both ourselves and the customers to handle it meticulously.”

The post states that the theater will be reopening “sooner” than people think and that the owners do have a set opening date.

After initially trying to remain open during the renovation process, the decision was made to close, renovate, and then re-open the newly-renovated theatre.

The exact details of the renovations are not clear but a response to a Facebook comment stated that they will include, “significantly more lobby space, vastly improved lighting and seating and a very unique ambiance.”

“We are not redecorating, we are truly remodeling this old thing,” the response states.

According to Cinegrands facebook page they have reopened as of this past Friday Jan 20. They posted photos and all. Looks really nice.

Two photos from their Facebook page added to photos

The theater is closed https://www.app.com/story/money/business/main-street/whats-going-there/2019/03/05/cine-grand-middlebrook-closes-ocean-township-movie-theater/3066788002/

if this theatre is taken over by another company, it will be the 5th owner in its 25 year existence. CJM, Clearview, Bow-tie, Cine Grand. It will have an uphill battle trying to compete with AMC 3 miles up the road. Even when I worked there up till 2004, it never did the business it was capable of.

Drove by here the other day. Sad to see it sitting here empty and abandoned. I remember the early years when this place would be so busy all summer.

I guess this theatre is done. Its been closed so long people have probably forgotten about it, especially with AMC just 3 miles up the road.

Was in the area yesterday and drove by. A large sign on the front of the building says 30,000 square feet available. Mixed use. I guess its days as a movie theatre are done.