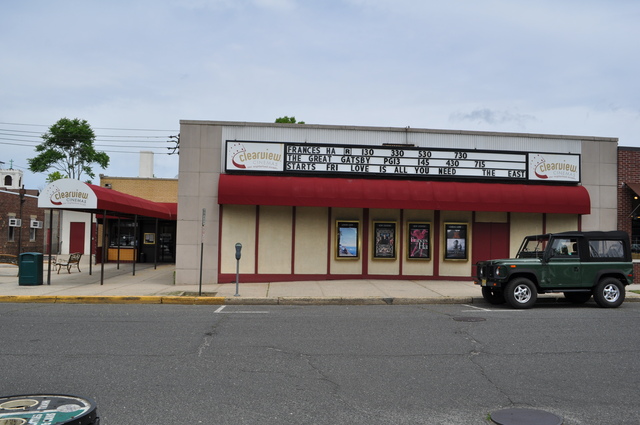 Opened March 31, 1971 as a single screen named Cinema III, with Walt Disney’s “Fantasia”. Operated by Music Makers Theaters it was a conversion of a former hardware store. It became a twin when another auditorium was created in the building. First operated by Music Makers Theaters, it later became a Loews theatre and was eventually acquired by Clearview Cinemas who operated it as an art house. Operation changed in June 2013 from Clearview to Bow-Tie Cinemas when they took most Clearview locations.

It was closed on March 16, 2020 due to the Covid-19 Pandemic. Just before shutting down Bow Tie sold the theater to the Count Basie Arts Center who will operate the theater beginning in October, 2020. The Count Basie Center for the Arts reopened October 2, 2020 as the Basie Center Cinemas, for independent and major studio films, for film festivals, and will host lectures and workshops. It will also continue to host late-night screenings of “The Rocky Horror Picture Show”. Seating capacities are:199 & 134.

Very small twin that a few years ago needed some spruceing up. Seems to have been carved out of what would have been an old store or warehouse. Nothing special.

The October 9, 1912, issue of The American Architect carried a notice about a theater that was to be built on White Street. The $20,000 project was being designed by the local firm J.C. & G.A. Delatush. White Street is only two blocks long. I wonder if this 1912 project, assuming it was carried out, is the house that became the Red Bank Art Cinemas?

This was I believe owned by Music Makers (who built crappy looking theaters in the 70’s/80’s) – then became Loews / Sony Theaters (it was one of its few art houses, along with the Community Theatre in Fairfield CT) and eventually it was sold to Clearview Cinemas. If an art release became popular or warranted an extra week in those days, Monmouth Mall was its “move over” theatre.

This opened as Cinema III (one screen) on March 31st, 1971. Grand opening ad in photo section.

Saw a film for the first time here on Saturday – very weird retrofit of an existing building with what looks like a second theater tacked on around back. I agree they should spruce-up the exterior, it almost looks like a dive bar from the street. Theatre #1 was surpassingly larger than I imagined, music makers (or whomever built it) dug into the ground of the store front and created a theater that now seats over 200 (with the plush Clearview rockers they installed at the Claridige and Cinema 12) with a stage (at street level) and it appears it might still have a curtain.

Theatre #2 was around the back – the lobby (with the concession stand) is tiny but the tack-on lobby that led to theater #2 was actually kind of spacious oddly enough. The bathrooms too were also tiny and they didn’t get the same kind of upgrade the other Clearviews got – they were straight 70s. Music Makers certainly built odd theaters – I’m curious to know more about them as I think this might be the last of their locations still running now that the AMC Loews Stroud Mall has been long gone and converted into a state of the art Cinemark.

This theatre is going to reopen as the Count Casic Center for the arts next month View story: https://www.nj.com/entertainment/2020/09/count-basie-center-takes-over-red-bank-movie-theater-for-october-opening.html?fbclid=IwAR1SOfEi6Aba8AxqecdL815QRCB7xKF2sp3HkyCUS-wqOme0L2hqxRqd8w8

Correction it will be call Count Basie Cinemas

Please rename it the Basie Center Cinemas and the website is https://thebasie.org/venue/basie-center-cinemas/