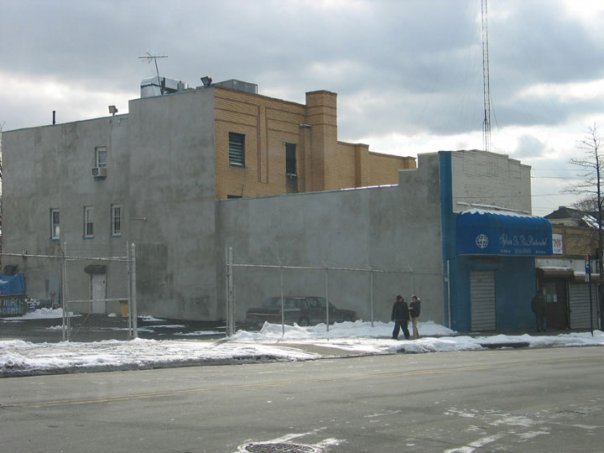 Look at the Street View image at the top of this page, Markiebee800. The old Beach Theatre is on the south side of Randall, approximately half-way between Taylor and Beach. The sign above the entrance says “Iglesias de Dios Pentacostal” and the auditorium rises behind the entrance in yellow-colored brick with reddish trim, running parallel to Randall, towards Beach. That Pharmacy & Medical Office is actually across Beach from what would have been the screen wall of the Beach Theatre.

Okay Ed, I’m gonna check out what you just wrote me when I’m over there. Grew up after it closed in Monroe Houses.. Thanks Man… Will report what I see…grew up going to The Circle, Loews American, The Palace & Whitestone.

I wish to corroborate Ed’s memory. The Google street view that I have (1/15/13) is dated June 2011, so if the structure was demolished, it happened in the last 18 months. In the 1960s, on the corner of Beach and Randall Avenues where that pharmacy and medical office now stands, was a luncheonette. Somewhere in the middle of the Beach Theater block was a pizzeria, where I would go after school (Holy Cross) almost daily. Just north of the theater, where there is now a parking lot, was a hilly, undeveloped lot with a tree that we could throw a rope around and swing from. I remember the frenzied crowds in 1966 when the Adam West “Batman” movie opened there and someone dressed as the Caped Crusader (West himself?) was mobbed. I didn’t move out of that area until 1975, but I just don’t remember its conversion to a church, apparently in 1969. Great memories of watching flicks there from about 1963 to 1968 (“Bye Bye Birdie,” “A Hard Day’s Night,” “Help!,” “Jason and Argonauts” stand out.)

So, Ken, if you are patrolling the pages of CT tonight (or in the wee hours UK time), please correct the status of this theater as closed, but not demolished.

The Pentecostal Church still remains! This past December 2012 I was allowed entrance into the building by the parishioners of that church, who were amazed by the fact that I had previously known the church as a movie theater. Although they were aware of this themselves, none of them were actual members at the time of the transition. The interior has been modified to accommodate the church (the glass paneled wall that separated the seating from the candy counter and the candy counter have been removed and the seats were replaced with church benches) but much of the Art Deco architecture remains(the terrazzo floors, the banisters, the brushed steel and brass movie poster display cases and light fixtures). The lone etched glass light panel at the curve in the stairs still exists undamaged after 76 years. (They even opened the panel to show me the electrical lighting system. I was given unfettered access to every part of the building, even the hallowed projection room. The church owners have also purchased some of the storefronts on Randall Avenue and have incorporated them into the church building. From the street they look like shuttered stores but inside they are school rooms and nurseries for the congregants.

Hey bipolardisordernaclaerio, you weren’t able to take pictures? Thanks.

Dear Willburg145, Yes, I have a few and I am going back to video tape inside if allowed. I am not sure how to post photos here. When I figure it out I’ll put them up. Nick

My father, Oliver Spencer, founded this church that was housed in the old Beach Theatre. The church actually bought the entire block of businesses.

As a 3 yr old, I broke my arm on the Terrazzo Floor in the lobby while trying to get out of a moving shopping cart. It was a bunch of kids playing around during the time it was being converted to the church.

There used to be a shop that sold Italian Ice in one of the store fronts that would get a lot of business on days there was church.

Maybe if I can get back there someday, they’ll let me take the Grand Tour as well.