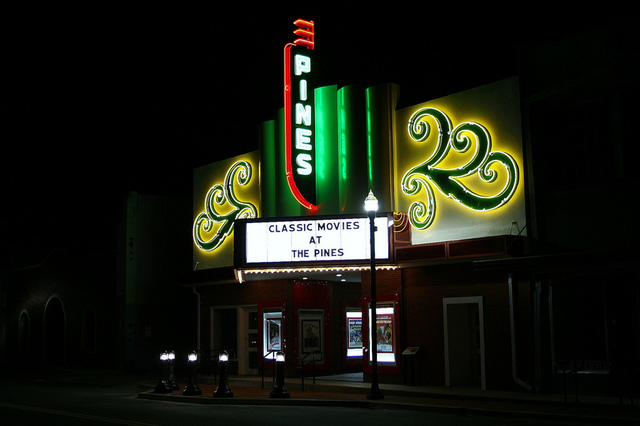 The Pines Theatre was built in 1925 and had a seating capacity for 751. It was closed in the 1950’s, and was later purchased by the city of Lufkin. At some point after closing it was used as a church called the “Covenant of Love-Outreach”. The Pines Theatre was added to the National Register of Historic Places in 1988.

Work began on a restoration/renovation in March 2011. A Grand Reopening was held December 1, 2012, featuring Celtic Thunder performer Paul Byrom. The 431-seat Pines Theatre hosts live performances and concerts. It is equipped with HD projection for screening movies. Concessions and a bar will be available, and the theatre can be rented as a venue space.

Here’s my Texas Escapes feature about the Pines:

I remember going to this theater as a kid one year in the late 1970’s in October when it was used by the Lufkin Jaycees as the site of their yearly charity haunted house.

Never understood anyone wanting to hold Church in movie theatre.

Here is an interesting article on the Pines renovation from the Lufkin Daily news.

According to old Lufkin City Directories, Non Binion managed the Pines from at least 1928 until 1937. In 1928, the address was listed as 113-115 S 1st Street. In later directories, it was only 113. Mrs. Hollis Christie is listed as operating the theatre in the 1946-47 directory. The phone listing was #141. The 1928 listing also mentioned East Texas Theatres Inc., who later operated a number of other movie houses in the area.

Hello from Lufkin! We just wanted to let you know that The Pines Theatre is nearly finished being remodeled and will have a Grand Opening on December 1, 2012. Please call the Lufkin Convention and Visitors Bureau for more information and to purchase tickets: Tara:(936) 633-0349 or Alyssa(936) 633-0359

I remember it when it was a church