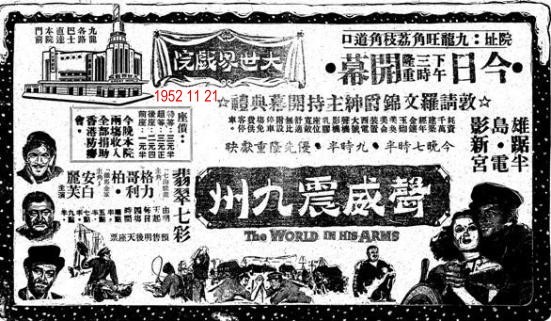 The Great World Theatre on the Kowloon side of Hong Kong opened on 21st November, 1952 with Gregory Peck and Ann Blythe in “The World in His Arms”.

The opening advertisement for the theatre read:

A residential block was built on the site of the theatre.

The Great World Theatre was located south of Boundary Street, 1.5 blocks west of Nathan Road. For some reasons, it never got to be a popular and busy theatre like some others. I watched several films there, including one about the B-29 flying fortress. The ticket-man there was always nice to let me and my uncle in to share a single seat.
YBF

@YBF. Great World was on the west sid of Nathan Road and, traditionally, the location was less busy than the east side, particularly in Mong Kok. Cinemas on the west side, Great World, South China, Ritz, and even recently Dynasty, were not as busy as those on the east side, Royal, Empress, Gala, Hollywood, and recently Broadway Mong Kok. Rex was the only exception but helped by its location closed to Argyle Street and the MTR station. The further south you go, the effect started to reverse.