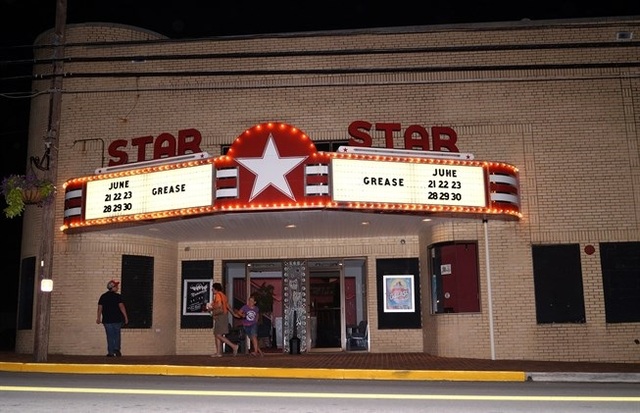 The Star Theater was a small town movie house that originally opened in 1949. It was completely renovated into a community theater for live performances by the Russell County Arts Council in the early 1990s with funds raised by grants, and donations from the governments of Russell Springs and the county seat city of Jamestown, as well as private individuals.

Since opening the remodeled Star Theater in July 1994, the Russell County Arts Council has staged nearly a hundred productions ranging from major plays to dance and musical performances, from performances by the Lake Cumberland Choral Society to gospel singings, to magic shows and even a dulcimer concert. Country music superstar Steve Wariner, who grew up in Russell Springs, has performed to sellout crowds. In addition to providing a “professional” venue for students enrolled in Russell County High School’s drama classes, the theater has been used for programs involving the community’s School Safety Programs.

An innovative series of plays performed by casts consisting entirely of children in all roles has given local and area youth a significant stage and performing experience. Many of these have gone on to perform with the theater in adult roles, and several have advanced into drama programs at major universities.

Additionally, the Star Theater and its recently opened annex building, the Norfleet Gallery, have been used to focus on other artistic endeavors. An annual Arts & Crafts festival is held in November, allowing regional writers, artists and craftspersons opportunities to display and sell their works. The smaller Gallery inside the Star Theater usually features displays of local and regional art, photographs, quilting and more during the performance runs of major productions.

Major musical productions have included several annual performances of The Nutcracker ballet, plus major Broadway shows such as Annie, Oklahoma!, The Sound of Music and others. Dramas and comedic plays featuring casts of up to 60 persons have included classics such as Frankenstein, Cat On A Hot Tin Roof, The Odd Couple, Oliver Twist, The Secret Garden, Tom Sawyer and others. Contemporary plays have included Beauty and the Beast, Faith County, Here Come The Brides, Lizzie Borden, Night Mother, Rumors, Steel Magnolias, Ten Little Indians, Twelve Angry People and others. Several original plays have been performed in recent years as well.

The Star Theater is a significant structure, located on the corner of Main and Wilson Streets in the small downtown business district of Russell Springs, Ky. The recently acquired and remodeled Norfleet Gallery building is located next door, also facing Main Street.

The Star complex consists of the outdoor traditional box office and marquee, a nice lobby with two balconies, a concession window and kitchen off the lobby, and a small gallery room also off the lobby. A dual staircase leads to the balconies. Off one balcony is the entrance to the costume department. The lobby is used to display local artwork and photos of previous productions.

There are four entrances to the main auditorium, two on ground level, and one off each balcony. The main auditorium consists of quality theater stadium style seating that can be powered back to open the entire floor. The auditorium can comfortably seat a maximum of 210 persons.

The stage is a modified thrust type that extends beyond the proscenium and can be configured from wall to wall. There are two wings behind the proscenium. A large green room is located behind the stage. The construction and prop storage room is a large addition off the stage left wing and can be used for storing and transitioning large set pieces during performances.

The tech booth is located on the upper level at the back of the auditorium. The 24-input sound board was installed in summer 2005 along with an all new digital stereo sound system that includes three power amps and a 600-watt stadium subwoofer mounted beneath the audience seats. Inputs to the sound system include computer digital audio, two DVD players, and a cassette tape deck. A TV monitor camera is permanently mounted to feed video and sound into the green room for the cast to be able to see the progress of the production. A VCR in the system can be used to record rehearsals on the main stage.

The main stage lighting system is a new 32-fader control system installed in summer 2004. It is fully digital and can be programmed for most any function. There are 32 stage lights, consisting of 16 500-watt fresnel units, 8 750-watt ellipsoidal units and 8 575-watt ellipsoidals, plus a follow spot.

The Norfleet Gallery consists of a small foyer entrance, and a large rectangular space that can be used for multiple functions. There is a dressing room in the rear. The main room can be configured via curtain for various lengths. The gallery is often used as a rehearsal hall for coming productions while the current showing production has the main auditorium at the Star in use. It is also used for receptions and cast parties.

The Norfleet Gallery contains an 8 x 16 foot stage and lighting consisting of four PAR-type fixtures. Additional units can be placed. Several productions have been staged or are planned for the smaller venue.

Another use is as a gallery for local artistic exhibits, and for the annual Arts & Crafts Festival in November.