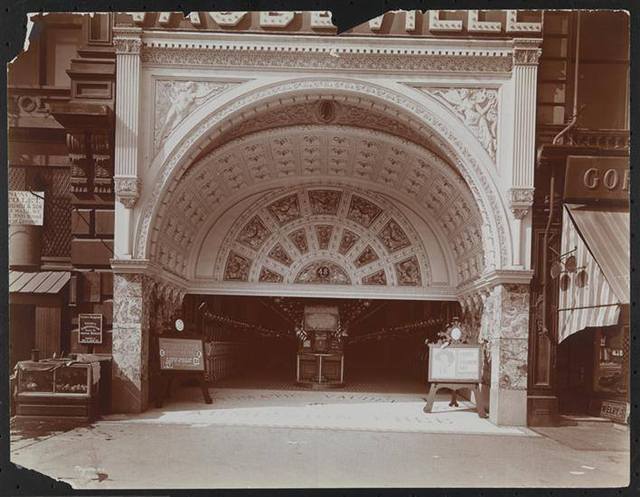 The Crystal Hall was a small Union Square movie house located on E. 14th Street between Broadway and University Place. Most interestingly, the Hall began life as a penny arcade opened in 1903 by future founder of Paramount Pictures, Adolph Zukor and his partners Morris Kahn and Mitchell Mark. Operating as The Automatic Vaudeville Company, the arcade featured a variety of amusements including penny-operated peeps, phonographs with individual listening devices, stationary bicycles, punching bags and a basement shooting gallery. The movie theater was installed several years later on the floor above the arcade and was reportedly reached by a glass staircase behind which water cascaded over colored lights. Admission for viewing the two-reel “flickers” was five cents.

With financial backing from burgeoning theater impresario Marcus Loew, the partners would go on to open similar operations in Boston, Philadelphia and Newark. Zukor himself would join Loew’s company to build a chain of some two dozen nickelodeons and theaters before the two men parted ways in 1912. Zukor would go on to introduce feature length films to American audiences and build his own chain of magnificent movie houses, including his flagship Paramount Theater in Times Square.

Meanwhile, the Crystal Hall would eventually fall under the proprietorship of a gentleman by the name of William F. Shorck, who was managing the theater when, on the evening of March 4th, 1923, just after 8pm, a fire broke out in the shooting gallery. Smoke started pouring into the theater as a full house enjoyed the on screen antics of Charlie Chaplin in “Crippled Trouble”. While some 30 fireman were overcome by smoke and heat, the theater was evacuated in an orderly fashion and no patrons or theater workers were seriously harmed. The blaze was reportedly witnessed by a crowd of some 20,000 that had gathered in Union Square to watch the fireman try to extinguish the flames.

Having been gutted by fire (and with such establishments having been outmoded by newer and larger motion picture theaters), the building was renovated and converted to retail use. Combined with adjoining buildings, the site became an Orbach’s before being completely reconstructed around 1965 for Mays Department Store, who vacated in 1988. The building was completely remodeled once again in the ‘90’s as a retail complex currently known as 4 Union Square.

Thank you, Lost Memory, for pointing me in the right direction on this one.

Trolling around the web, I found some old images of the Crystal Hall. Here’s an exterior shot taken very early on (the caption reads 1900, but this may just be an approximation) when the establishment was merely a penny arcade. This interior shot of the arcade is also dated 1900. It appears to have been much larger than I assumed.

Here’s a wider angle that is dated 1910. It appears that by this time, the theater had been added on the second floor and the name Crystal Hall advertised at the top of the facade. Note the “Comedy Theatre” sign next door. Looks like a separate establishment and I wonder if it’s listed here on CT. I lifted that photo from the Cyburbia Forum website, where it may be found about a quarter of the way down the page.

Finally, at the top of this page is a 1909 evening shot of the facade with the words “Crystal Hall” clearly visible on the arch above the entrance alcove.

Lost… I didn’t register for the Cyburbia link. If you give it a moment to load, you may still scroll down through the photos on that page despite the message advising that you have not logged in.

As I mentioned in the introduction, Zukor and his partners formed “The Automatic Vaudeville Company” to operate this arcade, and it seems from the images I just posted that Automatic Vaudeville was used as the name of the establishment. However, once the theater was installed on the second floor, the name Crystal Hall was instituted. I don’t know that Automatic Vaudeville ever applied to anything other than the penny-operated mutascopes on the ground floor, so I’m not convinced that it should be listed as a previous name. Ceartainly the “one cent” sign did not apply to the theater. According to my research, a separate 5 cents admission was charged to view the two-reel projections in the upstairs auditorium.

I’m trying to research that Comedy Theatre, but I’m guessing you might be right about it possibly being a live performance space exclusively. There was a live performance Comedy Theatre run by William Collier up on W. 36th Street circa 1910 into at least the late 1920’s. I wonder if this was an earlier incarnation, from before the theater district migrated north to Longacre Square (later known as Times Square).

My mistake about the midtown Comedy Theatre. It was located at 108 West 41st Street and built in 1909. It became the Mercury Theatre in 1937 and was home to the troupe of the same name founded by Orson Welles and John Houseman, before being demolished in 1942.

Warren… I was able to locate a couple of the titles listed on the marquees in the cowboy-themed photo you date around 1910-11. Both “Falsely Accused” and “The Ranchman’s Son” were short films released in 1911 per IMDB.COM. I couldn’t find any information on the other titles. However, since I have been able to identity the title “The Ranchman’s Son” (assuming the match is not purely coincidental), we now know that the Comedy Theatre adjacent to the Automatic Vaudeville did indeed operate as an early cinema – at least for a time.

J.F. Lundy, I just stumbled onto that image you posted.

Circa 1911 photo added, courtesy of Fine Art America. A broke D.W. Griffith took an acting role in 1908’s “Falsely Accused”. “The Ranchman’s Son” next door was released in 1911.

in the above intro it never states point blank that the building(s)which housed this theater were demolished. so does that mean that remnants of the Crystal Hall might exist within the Whole Foods and DSW stores?

bigjoe59, I believe that part of the building still remains as Max Brenners Chocolate, a store near that location. The exterior design looks the same and the building kind of gets cut off where a new building comes in, so I think that still remains.