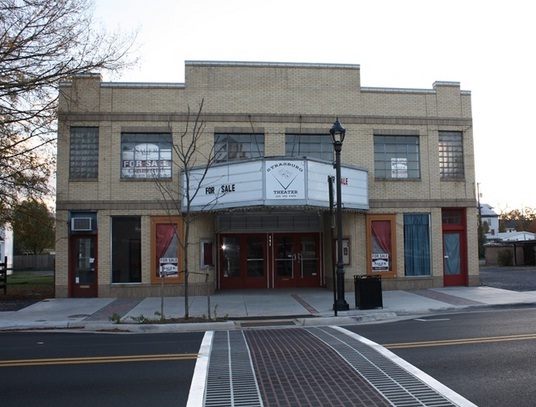 Come to the newly restored and renovated Strasburg Theater - a place for the community to gather and enjoy the local arts and events. There’s always something to do at the Strasburg Theater! From exhibitions, live theatre, Thursday-night karaoke, Wednesday-night local music jams, kid-friendly events, and more! We feature both national and local entertainment on Friday and Saturday evenings. Visit the Strasburg Theater website to find out more information.

The Strasburg was previously the Home. Here is a 1989 photo by Michael Putnam:
http://tinyurl.com/28z3g9

In 1970, the Home was operated by Dalke’s Valley Theaters.

An essay about movie theaters in the Shenandoah Valley by historian Douglas Gomery says that the 600-seat Home Theatre in Strasburg was opened by the Dalke chain in 1949, as a replacement for their 260-seat Strand Theatre, which they had opened in 1921.

This item from the June 16, 1921 issue of Manufacturers Record must be about the Strand, though it gives a much larger seating capacity which, I suppose, could simply have been a typo: