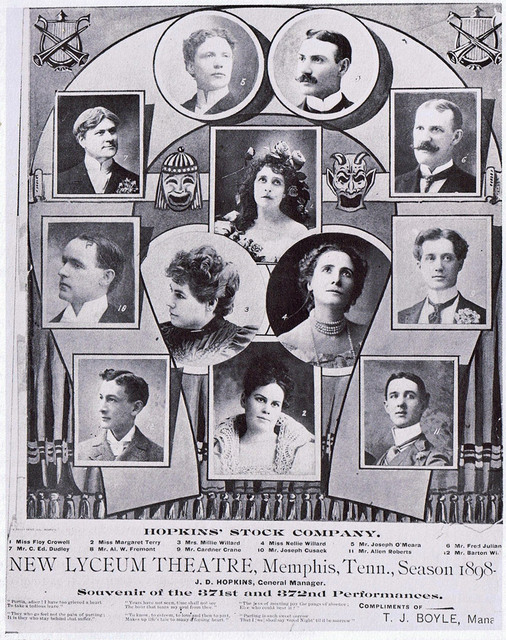 There was an earlier Lyceum Theatre which opened in September of 1890 and burned in 1893, located at the corner of Third Street and Union Street.

The location of the pictured building was on the southeast corner of N. Second Street and Jefferson Street. Opened on November 3, 1894 by H.L. Brinkley, it was a traditional house, flat ceiling, oblong proscenium, cooled with many electric fans with windows for ventilation in the auditorium of both sides. Other photographs of the auditorium show the balcony held up by many columns and the highest balcony extending back almost to the street. It was illuminated with exposed light bulbs (said to be the first theatre in Memphis to have electric lighting) and had open metalwork railings in the three balconies and boxes. The first balcony was a ‘Golden Horseshoe’, with chairs instead of theatre seats. The interior theatre posted here shows the standing electric fans on the box rails and the painted asbestos safety curtain.

Around 1917, it was the first large theatre in Memphis to show movies regularly when it was leased to Loew’s Inc. while their Loew’s State Theatre and Loew’s Palace Theatre were both under construction. A photograph from this period has ‘Loew’s’ inserted on the corner sign and on the marquee was “Heart of a Child”, a 1920 film starring Nazimova. Another photograph shows the stage and screen done as an outdoor set, with musicians under trellises and what appears to be a photoplayer in the pit with a double mirror setup.

For most of its career it was a legitimate theatre featuring a number of seasons by the repertory company headed by Gene Lewis and Olga Worth. It had its vaudeville days and finally turned to ‘girlie’ shows in the 1930’s, but these were not sufficient to keep it from being demolished in 1935. A commercial building occupies the site today.

The New York Clipper Annual (available online from the Columbia University Libraries) says that the Lyceum Theatre in Memphis was dedicated on September 29, 1890. Interestingly, the Barton Opera House in Fresno, California, is listed as having been dedicated the same day.

An Arcadia Publishing Company book titled Memphis, by Robert W. Dye, has a photo of the Lyceum dated 1935, but the caption says the theater was built in 1894. It turns out that the original Lyceum burned in November, 1893, with a loss of $360,000 according to the 1896 edition of the annual The Statistician and Economist.

In 1951, a thesis/dissertation was published by the University of Mississippi. Titled “The Lyceum theater of Memphis, 1890-1900” and authored by Carolyn Powell, a copy is in the University’s library but not available online. The same library has a masters thesis dated 1971, by Gordon Theodore Batson, titled “The theatrical history of the Lyceum Theatre of Memphis, 1910-1935.” This is not available online either. It seems likely that the Lyceum operated from 1890 to 1935, with an interruption of about a year for rebuilding in 1893-1894. Had it continued in operation beyond 1935, Mr. Batson would probably have written a longer thesis.

This web page displays the cover of a program from the Lyceum Theatre for the 1924-1925 season. It housed a stock company at that time. Unfortunately the theater’s address is not on the program.

The closest I’ve been able to get to an address for the Lyceum is a note in a 1901 issue of the Memphis Medical Monthly, which mentioned a doctor who had lately moved his office to the Lyceum Theater Building, southeast corner of Second and Jefferson streets.

I’ve had no luck discovering the architect of either the 1890 building or the rebuilt Lyceum of 1894.

I’m not sure how long Loew’s operated this theater, but it became a Loew’s house in 1917. A brief item in an issue of The Moving Picture World that year said that Loew’s had opened the Lyceum in Memphis as a vaudeville and picture house, pending construction of the projected new Loew’s house in that city. I’ve been unable to find any later mentions of the Lyceum in connection with Loew’s. The circuit might have dropped the Lyceum when the Palace and State were opened.

The first Lyceum theatre was in the lower level of the Memphis Athletic Association on the northwest corner of Third and Union. There is a drawing of this building in the library’s collection that references the theatre. This is the building that burned in 1893. The second Lyceum, in the photos here, opened in 1894 and was demolished in 1935. This second was used by Loew’s from 1916 to 1920, the year Loew’s State opened.

The interior photo has a date of 1900 (library record).

The second Lyceum Theatre was designed by architect Frank Cox (Tignal Franklin Cox) who was then practicing in New Orleans. Later he moved to Chicago and then to Covina, California. In the late 19th and early 20th centuries he was a prolific theater architect with a national presence, a feat all the more impressive given that he did not begin practicing architecture until he was nearly 40 years old, having been a sign painter and a scenic designer prior to that.