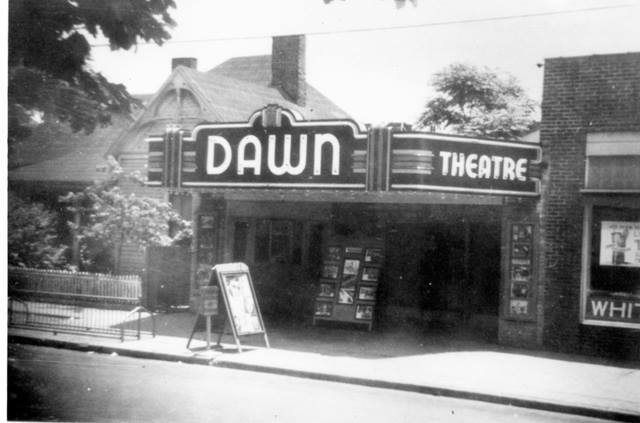 The Dawn Theatre was opened on February 18, 1946 with Elsa Lanchester in “Son of Lassie”. It was demolished in September 2011.

Ailor Avenue is located just off Western Avenue close to University Avenue in the Mechanicsville neighborhood. This theatre was apparently was open between 1950 and 1955. The exact address does not seem to exist anymore, but Mechanicsville was pretty much decimated by the construction of I-40. From the location, it is possible that this was an African American theatre.

According to Ron Allen’s web page AFRICAN AMERICAN THEATERS IN KNOXVILLE, The DAWN THEATER was located at the corner of Ailor and Seventeenth Street, a block south of Western Ave. The DAWN was an all white theater while the nearby SUNSET began as a segregated theater (whites on the main floor, and blacks in the balcony), which later became the African American RITZ/SAVOY/BOOKER T Theater.

the building still stands. It is painted yellow now and used to have some kind of welding or metal working shop in it.

The building that once housed the Dawn Theatre was demolished this week along with adjacent buildings. No announcement has been made for the future of the property.

This opened on February 18th, 1946. Grand opening ad in the photo section.