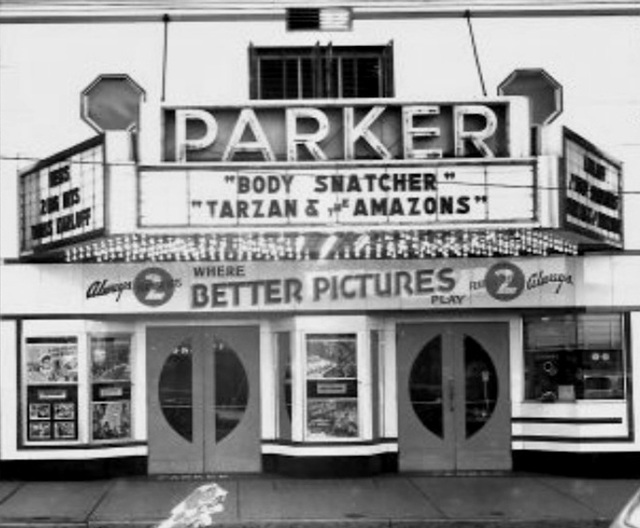 The Parker Theater opened around 1940. It was located on the east side of the 700 block of Market Street, between a bank on the corner and G.C. Murphys. (S.S.) Kresge’s (long before Kresge corporation morphed into K-Mart) was also in this block, along with Cox’s Department Store and Montgomery Ward on the opposite side of the street.

Smaller than either the Contemporaneous Smoot Theatre or the Burwell Theatre, the Parker Theater had a small ticket booth on the right-hand side of the entrance. It was comprised of a small lobby and the auditorium consisted of both a main floor and a balcony (which was not often open). Prices in 1960 were 25 cents for under 12’s and $1 for adults.

While it may not have shown the bigger releases, which were generally taken up by the Smoot Theatre, it did show mainline films.

The building is now occupied by Y.M.C.A.

Operated by the JUR Theater Circuit in the early sixties.

The Parker did show mainstream A pictures for most of its existence (Actually it showed the more arty type films; I saw “Marty” there when I was a small boy. “A Catered Affair” played there too. I remember seeing several 3D films at the Parker including “Sangaree” starring Rhonda Fleming and Fernando Llamas. Outside the theatre they had a special display using view masters to preview the film.
The front of the theatre had three display cases – two used 22X28, half sheets and four 8x10 photos undereneath and the other was for coming attractions, using a 14X36 window card surrounded by eight 8X10 photos to the right side and three at the bottom. I wish someone had pictures of this theatre. The lobby of this theatre was practically nonexistant.

According to the book Historic Movie Theatres of West Virginia the former YMCA actually reused this building. From looking at Google Streetview I believe it is correct. This building is not demolished, just heavily modified and combined with the building next to it.