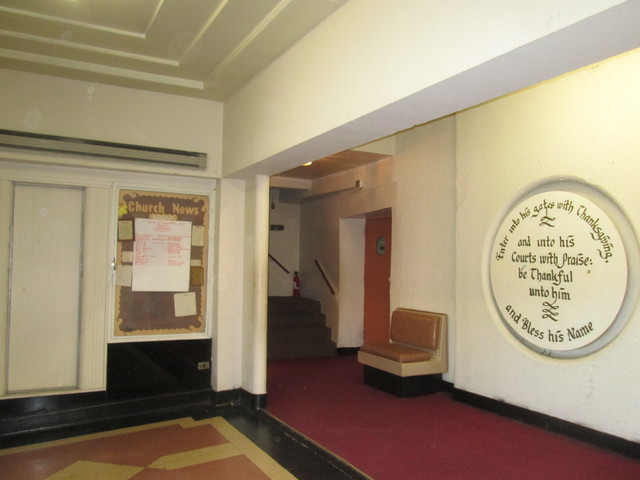 Built in 1914 for the Schoenstadt circuit as the Home, this theater was located on South Halsted Street near 50th Place. The Home originally contained a Reproduco organ. It closed in 1930, and was entirely rebuilt six years later and renamed the Radio Theatre.

The Radio showed final run movies as many as two years after playing the Loop movie palaces. The bill changed three times a week.

As you entered the lobby there was a large round blue Deco mirror. The auditorium had two aisles and a small stage was in front. The only time the stage was used was for the annual 14th Ward Democratic Christmas party for the neighborhood kids.

TV killed it in the early 1950’s and it became a meat packing storage facility. Today, the former theater serves as a church.

Bryan
Thanks for the response. I believe your interpretation is an accurate one. I should have emphasized more that it didn’t appear to be the Radio Theater, mainly because Halsted St. (at the 5000 So. area) was not as built up as it was at 6300 So. blocks. What threw me was the theater-type light bulb lettering on the marquee. With that in mind, I assumed it actually was the Radio Theater and concluded that that couldn’t be the L at 63rd & Halsted. I agree: Correct intersection, wrong ‘theater.’

I’d agree on the Radio store interpretation; after all, it wasn’t named Radio until 1936 and the photo is clearly earlier

My parents told me about the remodeling of the Radio. They said that before the renovation, it was called the Home Theater. It had only one aisle down the center.
John Keting (jpkjr)

The church is called “Unity of Love M.B. Church”

The City list the address as 5031 S. Halsted and there is a 2000 photo available on the Cook County Assessor’s website.

Here are photos of this theatre.

May I add my two cents? I was born at 850 West 50th so I am familiar with the Radio Show as we called it. I don’t remember the Home Theater, prior to the Radio but I recall walking by the shuttered building on our way to the Halfield Theatre on Halsted near 55th Street or Garfield Blvd. I must have been around 8 years old, which would make that 1937 when the building was renovated and became the Radio Theater. On opening day they had Joe E.Brown there. I remember when he arrived, I jumped on the runningboard and looked directly into his face! He looked at me with his big smile and said, “Hi”. That theater brings back many happy memories. My wife, Dolores, spent many a happy hour there also. Paul Lemrise, Sr.

To meet an evergrowing demand for superior dramatic productions, the Masquers, a little theater group headed by Howard Rooney, 6248 Sangamon st., plan to inaugurate a season of plays starting with “Illusion,” September 18.

The plays are to be presented in the Masquers' own theater, a renovated movie house, at 5035 Halsted st. All work in rehabilitating the old showhouse is to be done by the players, following their own plans, designs and color schemes in the lay-outs of the interior.

For several years, the playhouse on Halsted st. has been empty, having been originally designed for silent pictures. In the course of the passing years, the building has deteriorated until now it is virtually dismantled. The Masquers have contracted with the owner of the theater to remove all but 100 of the seats, to enlarge the stage for dramatic offerings, and to make the necessary changes and redecorations incident to the opening in the Fall. The enterprise will be supported by subscriptions.

Towards the front of the theater and near the entrance a lounge will be furnished for the convenience of patrons. The plan is to allow for freedom and friendship during intermission and after plays.

Orange, silver and black will predominate in the color scheme of the interior. Indirect lighting will insure soft illumination.

With the schedule of the Masquers arranged to begin their season September 15, the work of renovating the theater building, coupled with rehearsals and other necessary work, will mean the attendance of the troupe at the theater four or five nights a week throughout the summer.

“Illusion”, the play that is to be the curtain-raiser at the Masquers little theater, has been written by Mr. Rooney especially for his company. With the script in readiness, work may be started at once towards preparing the way for its thorough and successful presentation. This end in view, the Masquers are meeting tonight at the Hamilton Park fieldhouse, 72nd st. and Parnell ave. at 8 o'clock, to discuss the project further and complete plans and arrangements for their newest undertaking.

Mr. Rooney will welcome persons interested in the drama or the mechanical side of the play at the meeting. If attendance tonight is impossible, he may be reached by telephone or letter at his home.
On the social calendar of the Masquers is a “Hollywood” party to be
given Saturday evening. June 30, in the basement bar at the home of
Paul Olsen, 7351 Lafayette ave. Guests will appear in costume or informal dress for an evening of dancing and gayety. Mr. Rooney is taking reservations.