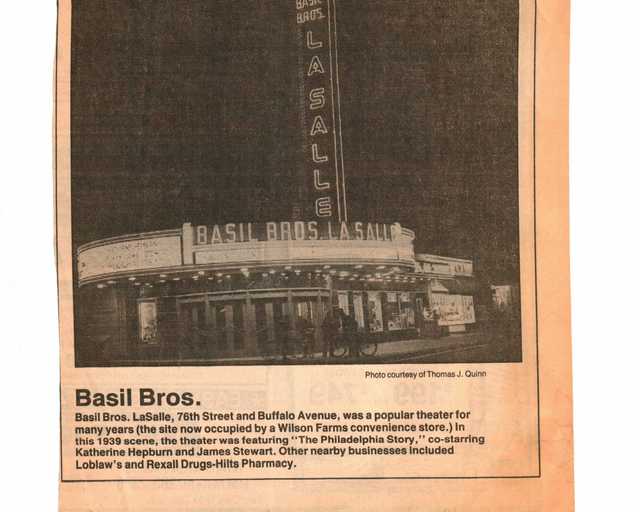 A popular neighborhood theatre on Buffalo Avenue at 76th Street from its opening October 21, 1937. The LaSalle Theatre was part of the Basil Brothers chain. It closed in the 1960’s and was demolished. The site of the theatre is today a parking lot for a convenience store.

Contributed by Lou B
Get Movie Tickets & Showtimes

Yes, but it just won’t be the same without sitting in an Eberson atmospheric atmosphere as the Mighty Wurlitzer plays.

I parked in that lot yesterday, and had no idea!

What is the status of this theatre that was being restored by a man who died about a year or so ago?

Correction: I see that it is demolished..had forgotten since not reading about this theatre in awhile. There was a theatre in NF that was being restored by a gentleman so perhaps LOUB can clear this up.

The only existing “theater” in Niagara Falls (I believe) is the Rapids on Main Street. I don’t see any activity there. Maybe inside.

I drove down Niagara St. and the Capitol Theatre sign which the late John McNab posted is still there. There is also a realtors sign which states Historic Theatre For Sale. Mr.McNab was in the process of renovating this theatre and using it for concerts. That is the same plan for the Rapids on Main St. The target date for its reopening is April.

LOUB: Thank you and yes the man’s name was John McNab.

Here is an item from Boxoffice magazine in June 1962:

The Elmwood Theater, Elmwood and Utica, has reopened under the banner of the Leci Theater Corp. after having been closed since January. Lou Levitch, head of Leci Corp., says the house will show both Hollywood and foreign films and plans call for their scheduling 21 to 28 days after the pictures close their downtown presentations. Leci also operates the North Park on Hertel Avenue, the LaSalle in LaSalle and the Lackawanna in the town of the same name south of here.

This group opened the LaSalle after the Basils pulled out.

The above website shows the LaSalle Theatre. Look at the prices on the marquee.

I’m told the architect of this theatre was Stanley Paukstela.