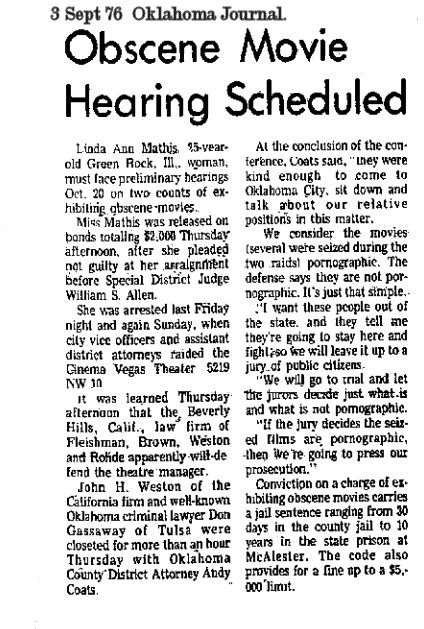 The Cinema Vegas Theatre was an adult cinema in operation from 1970 to November 1976. It became the Midway Lounge and in 2012 became 2015 a pole dancing club named Fantasy Island.

At the tres cajones I saw gay double features produced by Kris Films, “Motor Cycle Hero”, and “Blue Rose” which had recieved honorable mention at the Cannes Film Festival.

After reading these comments I called my gay Uncle Mumford in NYC to talk about this joint. Uncle said that while earning his BS at OCU he used to go to see gay movies in the #3 screening room. He described the decoration as walls painted a rich golden brown, trimmed in rust tones, with brown fiberglass upholstered theatre chairs. He told me that a couple of months before his 1984 graduation this adult theatre halted gay film presentation when walls were ripped down from the two smaller auditoriums in order to make the viewing area into one single screen cinema. At that point the lobby was also expanded to include a video rental outlet, and hard porn video projection replaced soft core films.

Within the enormous Habana Inn Gay Resort complex a “family” adult news stand and gift shop called Jungle Reds has operated successfully since the mid 1980’s.
Rumors frequently surface about a proposal to install a gay theater next to Jungle Reds. Gossip reports this cinema will offer projection DVD and live male strippers, and at last fill the void left by the long ago closure of the Chieftain, Paris, and Three Ball.
Everyone in the gay community is hoping this hearsay will actually materialize in the not too distant future.

A most reliable source recently infomed me that the actual name of this cinema was Fine Arts Cinema, 5219 NW. 10th.
The Fine Arts was located within a large entertainment complex that opened around 1970 and was suppose to attract a family trade. It originally featured an ice skating rink, a vaudeville theatre that featured both new and classic acts, a large game arcade, an ornate nightclub centered arouand an indoor swimming pool, and the Fine Arts Cinema 3.
For one reason or another every enterprize within this mall was a complete dud. The ice rink and vaudeville theatre quickly folded and were made over into girley show bars. The Fine Arts Cinema 3 went X-rated. After conversion into an adult enterprise the whole affair was a profitable success.
During its last few years the cinema was converted to a single screen auditorium and renamed Vegas Adult Video & Cinema.

Interesting Name for a Cinema.

Midway originally started out as the Animal House and occupied the eastern end of the building, with the cinema occupying the western ¾. Then, it became Midway and the cinema closed and remained empty for many years. The owner of Midway secured the entire building and moved the bar into the western portion, with plans to renovate the original area and incorporate it into the larger portion, but this has yet to happen.

Is there anyone called Mr Roarke or Tattoo in the Fantasy Island Pole Dancing Club?

This theatre was never known as the “Three ball Cinema” as another poster asserted, AS you can see from the posted images, especially the article from 1976, the theatre was originally known as the Cinema Vegas Theatre. Nor did it ever have three screens.