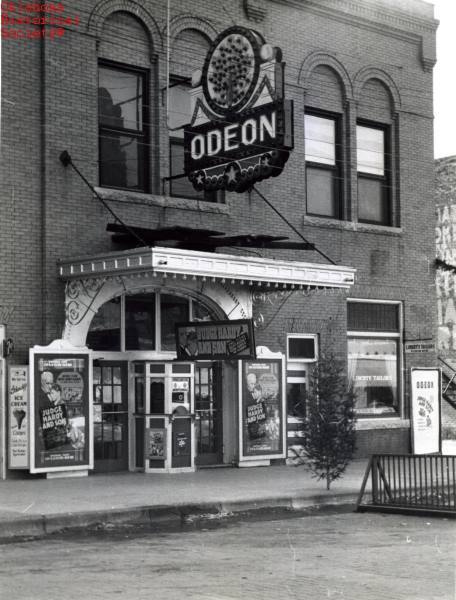 Period photos of the Liberty Theatre can be viewed here;
http://www.roadsideoklahoma.com/cinemasok

I’m not possitive, but I think that a view of the (photo left) Liberty Theatre can be seen in image of 3rd Street (note popcorn wagon out front). Go to this link and type in
“3rd street car construction"
View link

The name Oklah was used for two theaters in Bartlesville, both opened in 1908. The 1909-1910 edition of Julius Cahn’s Official Theatrical Guide lists the Oklah Theatre with 820 seats; 433 on the main floor, 187 in the balcony, and 200 in the gallery. A biography of oil man Frank Phillips says that the Oklah Theatre opened on September 25, 1908.

Meanwhile, the book Bartlesville,Oklahoma, by Karen Smith Woods, has a photo of an Oklah Air Dome, which the caption says opened on May 3, 1908, and seated some 1500.

Some time around 1940, the name Odeon must have been moved from one theater to another. As the Liberty is the only Bartlesville house listed with the aka Odeon at Cinema Treasures, I don’t know if the first Odeon is still unlisted, or if it is listed under another name but is missing the aka.

The 800-seat Oklah Opera House opened September 25, 1907 opening with the play, “Miss Pochahontas.” Its address was was 105-107 West Third Street. It switched to films and became the Oklah Theatre. Ventilation appears to have been a weakness so the Oklah Airdome launched May 9, 1909 operating in the warm summer months through the 1915 season.

In 1916, the Oklah Theatre improved ventilation and the Airdome was not opened for the season with the space converted. A big hit for the Oklah Theatre was its 1916 presentation of “Birth of a Nation.” It also had a big audience paying tribute to the late President Teddy Roosevelt at a memorial service in 1919.

The Oklah went out of business following an April 4, 1925 showing of Mary Pickford in “Dorothy Vernon of Haddon Hall.” A temporary closure ad was posted followed by a complaint by the property owner about equipment being removed from the premises by the operator.

Blanche L. Cutler, then managing the Odeon, gave the theatre brand new projection and a new interior renaming it on June 1, 1925 as the Liberty Theatre and “Welcome Stranger” on the big screen. The theatre was wired for sound to remain viable. Griffith Amusement Circuit bought out the theatre with a grand reopening on September 15, 1934. Movies ended initially on June 4, 1939 with a screening of “Men With Wings.” The space was used for wrestling the remainder of the month.

The Odeon Theatre closed on June 30, 1939 with “Tarzan Finds a Son” citing end of lease. The Odeon Building on Johnstone retained its name so the Odeon officially moved into the Liberty Theatre Building retaining the Liberty name but operating as the Odeon Theatre. The operators then moved its future bookings “temporarily” to the Liberty Theatre Building as the Odeon beginning on July 1, 1939 with “Confessions of a Nazi Spy.” (The picture of the Odeon in Cinema Treasures is from December 31, 1939 with “Judge Hardy and Son” on the big screen.) The theatre closed following the June 2, 1942 screening of “Roxie Hart.” It was used for sporadic events during World War II until a 1945 remodeling plan was introduced.

The theatre was gutted in 1945 for the creation a more modern theatre to the plans of architect Jack Corgan. That theatre would become the Arrow Theatre. That included moving the former opera house’s interior from a two balcony and wooden main floor to a single concrete floor with one, 191-seat balcony for African American patrons. The 728-seat theatre launched November 1, 1946 with an Open House followed by a November 3, 1946 screening of “Home Sweet Homicide.”