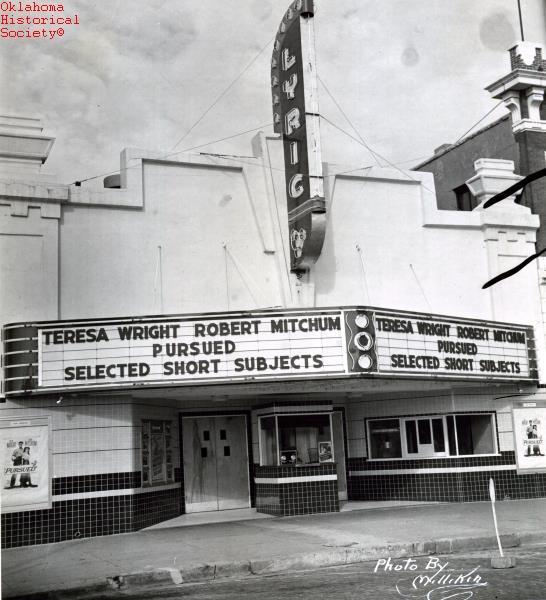 The Grand Theatre was opened June 5, 1913. In 1917 it was renamed Lyric Theatre. It was still open in 1957. In 1957 it was renamed Telemovie Theatre. Since demolished the site now serves as a parking lot.

Styled in fun Art Deco fantasy, the Lyric surely was most colourful inside and out. To view vintage images type in word “lyric”, then search …
View link

Great vintage images of the Lyric Theatre can be viewed on this site;
http://www.roadsideoklahoma.com/cinemasok

This theater opened as the Grand. Look at this photo of the Lyric Theatre, then compare this photo from the August 2, 1913, issue of the trade journal The Moving Picture Age, depicting the theater when it was called the Grand. The caption reveals that the Grand opened on June 5, 1913.

A larger version of the photo I linked to in my previous comment appears in the book Bartlesville, Oklahoma. The caption says the name Grand was changed to Lyric in 1917.

Page 88 of the book “Oklahoma City: Film Row” says the Lyric was the location of the Bartlesville Telemovie Experiment, a precursor to cable television that lasted from September 3rd, 1957 to June 6th 1958.

It also says the Lyric’s address was 325 Dewey Avenue.

On Google Street View, the building currently numbered 318 occupied by Cooper Herrington Furniture looks to me enough like the photo on page 88 of the book to possibly be the former Lyric.

The Lyric was definitely at 325 SE Dewey Avenue, and it has been demolished. Check the distinctive cornice and parapet of the building housing Chad Louis Designs (321 SE Dewey) and Southern Abstract (323 SE Dewey.) It is identical to the cornice and parapet seen adjacent to the theater in the 1947 photo added by DavidZornig. Next door, where the theater was, is now a parking lot.

In 1957, Video Independent Theaters and Vumore transformed the Lyric Theatre to the Telemovie Theatre, billed as “the first telemovie service in the world.”