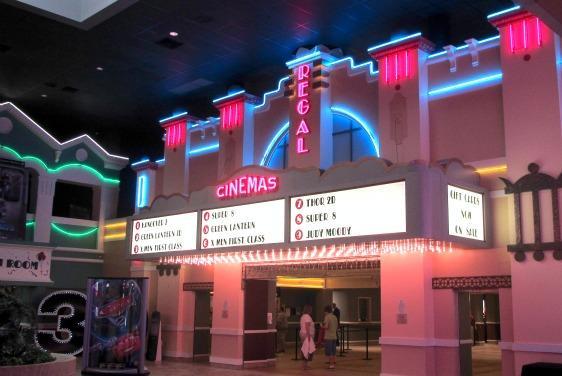 During the extensive renovation of West Town Mall during 1998, Regal Cinemas built this entirly new multiplex on the roof of the existing mall. It also incorporated the upper floor of the former J.C. Penny store, and opened November 6, 1998 with 1,682 seats in its nine auditoriums.

Most noteworthy in the design is the Atmospheric style arcade which forms the entrance to the theatre proper. At the theatre entrance is a free standing fountain sporting a figure (with umbrella) a-la “Singin' In The Rain”.

The two story tall lobby continues the Atmospheric style theme. This isn’t Eberson quality architecture, but the designer does get an A for effort here. Ticket sales are on one side of the lobby, concessions on the other. Between the two is a valiant attempt at Spanish Baroque executed in vacu-form plastic. Rich blue lights shine upward on a dark blue lay-in tile sky. There is no cloud machine.

Past the lobby one enters a long, wide, one story tall “hold out” corridor with good tile work on the floor, exposed geometric neon on the ceiling and poster cases on the walls.

The ticket taker stands at about the mid point of this corridor. Oddly, a single auditorim has been placed behind the concession counter, requiring a 180 degree turn and a trip down a LONG velvet roped aisle back into the lobby, past the candy stand, around a couple of corners and voila, stadium seating appears in front of the wandering movie goer. It was closed for renovations on January 3, 2018 and reopened July 19, 2018. The total seating capacity has been reduced to 736.

It is a fine theatre, with the highest quality presentation standards. If the architecture isn’t Eberson, it is at least to Regal’s credit that they attempted to bring an air of excitement to the experience of going to the movies.

Well,doggone It TSLOEWS Knoxville is big enough to have a NICK, TSLOEWS,ROBIN or Mike in that city. I have written alot on the Knoxville Theatres and I LIVE IN AUGUSTA,GEORGIA.

This theater was one of the “Funscapes” that Regal introduced in the late 1990’s. Funscape was one of the final nails that drove Regal into bankruptcy. My friend Chuck was the general manager here when it first opened in 1999, with The Phantom Menace being one of their first big screenings. They also had a premiere of October Sky here, with director Joe Johnston and Jake Gyllenhaal in attendance.

Sorry, I meant that my friend’s first movie here, as the general manager, was The Phantom Menace.

Effective today, this theater is temporarily closed to allow for renovations to take place. The managers here said that the theater should reopen no later than May or June.

The grand reopening for this theater will take place on Thursday, July 19, 2018 and will become another Cinebarre location. New seating capacities are:

Just got back from Abominable. The movie was great, though Auditorium 4’s circular polarization filter clearly needs some work. Probably worn out or something.