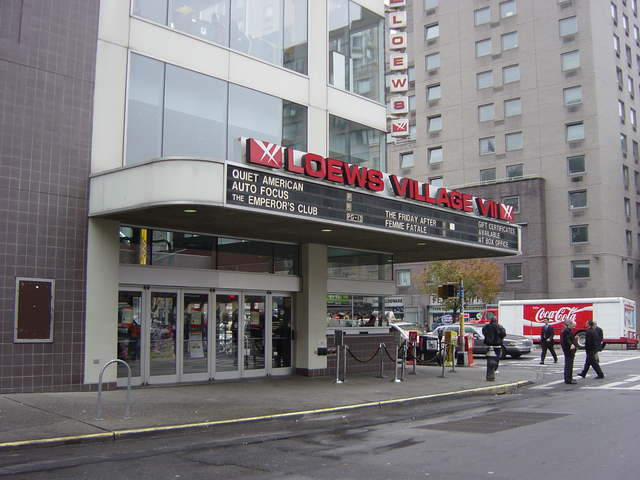 Loews opened this multi-level complex on May 24, 1991 on the site of a rather ornate one-story parking garage that had been built in 1868 as headquarters for the NYC Department of Public Charities and Corrections. With funkier offerings at other East Village theaters such as the Village East and Cinema Village, Loews opened this multiplex with more mainstream fare in mind for a gentrifying neighborhood.

The seven auditoriums with 1,952-seats are scattered on multiple levels, with large rooms in the cellar, First and third floor (the second floor skipped for lobby space, restrooms and a projection room) and two smaller rooms apiece on the fifth and sixth floors. The seating is conventional, rather than the stadium-style that would come into vogue in the late-1990’s.

The only problem I found if someone a few rows don’t relcine, and I recline, heads get in the way. The slope should of been done better.

So much improved after the renovations that took place around a year ago. I used to avoid, but it’s improved in pretty much every regard. The one negative on a recent visit to see a movie on the top floor, with two screens, was having a lot of bass coming from the adjacent auditorium, worse than hearing the subway trains rumbling past in the subterranean Angelika. But on the whole, just night and day better going to see movies here now than for the first two decades of the theate’s existence. Like most of the AMCs in NYC, the Loews name is entirely removed, The auditorium I was in had a seating capacity in the 55-60 range.

The Loews Village VII was among just eleven theaters in the United States that installed the then-new Dolby Digital sound system for their engagement of “Batman Returns” which opened twenty-five years ago today. And here’s the link to a retrospective article that commemorates the occasion.

Auditorium #3 used to also be THX certified, I wonder if this was the same one they installed Dolby Digital sound in?

Yes. The Dolby digital was soon retired when the digital projection equipment was installed.

Page name of this theater should be changed to AMC Village 7.