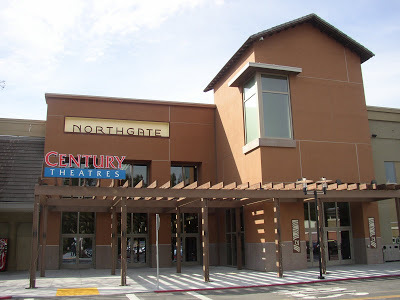 Northgate 15 Cinemas opened on November 17, 1994…exactly five years after former owner Pacific Theaters had built and opened the eight screen Rowland Plaza about 10 miles to the North. To date, it boasts the most amount of screens in Marin County, and was the last movie theatre to open in the county since.

While busy, Northgate Cinemas is plagued by being located in a junky mall that many people in Marin dislike frequenting. Auditoriums 1 through 9 are quite small, ranging from about 120 to 200 seats. The other 6 auditoriums are across the way, and #10 and #15 are closer to just 120 seats as well. Theatres #11-14 are larger, and in most years past 3 of those theatres featured THX…but recently they have not advertised that, which possibly means they are no longer certified.

Because of the small theatre size, many shows often sell out quickly. The theatre also has a reputation for showing movies that are poorly reviewed or soon to be “shelved”.

Around 2000, Century Theatres bought the Multiplex from Pacific Theatres and renovated it in November 2002 (as they did with many of the theatres in the area). At the time there was talk of converting some of the theatres into Stadium-style seating, but that has yet to happen. Northgate 15 has been credited with “saving” Northgate Mall, a destination for various stores that have gone out of business over the years…including Hot Dog on a Stick and Totally Trolls, just to name a couple.

Cinemark recently bought the entire Century Theatres chain, so we have yet to see what changes might be made in the near future.

Back in the 70s and 80s, when this was an outdoor mall, the Northgate Theater was a rather large single screen auditorium. I believe it was even outfitted for 70mm presentations, and showed Star Wars in the day. It was located roughly where the food court is located now.

The original Northgate (operated by Blumenfeld) theatre wasn’t in this development. If I recall it was in one of the other outlying shopping centers.

November 16th, 2002 ad for renovations in the photo section.