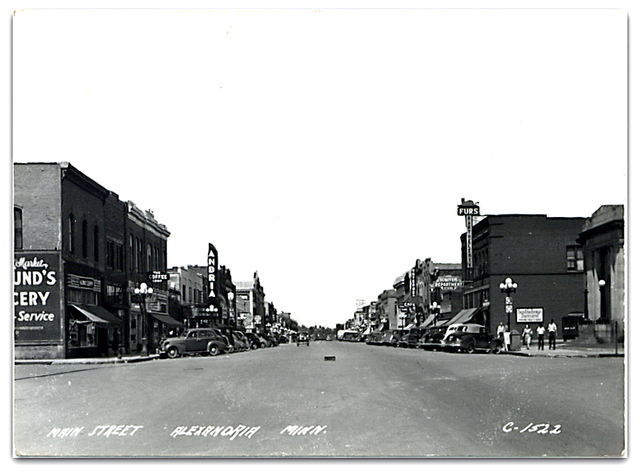 Originally opened in 1936. The former Andria Theatre on Broadway in downtown Alexandria, Minnesota has served since 1990 as the home of the Alexandria Area Arts Association. The theatre hosts live musical theater as well as other live performances.

The Andria Theatre has been operating since at least 1941 as it is listed with 750 seats in Film Daily Yearbook of that year.

By the mid-1970s this theater had been twinned.

Gentlemen, The Andria was originally a 1 screen house; in the photo; it was the storefront where the marquee extends over the sidewalk. it was adjacient on the south ( “ left ” in the photo )to a Gamble’s Hardware store which was remodeled to be a 2nd screen around 1974-75. The “ Andria 3 ” was an additional 1 screen theatre built in the Viking Plaza shopping center a couple of miles to the south around 1982. The Andria Twin Cinema & the Andria 3 did close around 1990-91 & were replaced by the Midway Mall Cinema.

From the 1940s a photo that captured a view of Main Street along with the Andria in Alexandria.

The caption of a photo on page 97 of Alexandria, by Barbara Grover, gives February 7, 1936, as the opening date of the Andria Theatre (Google Books preview.)