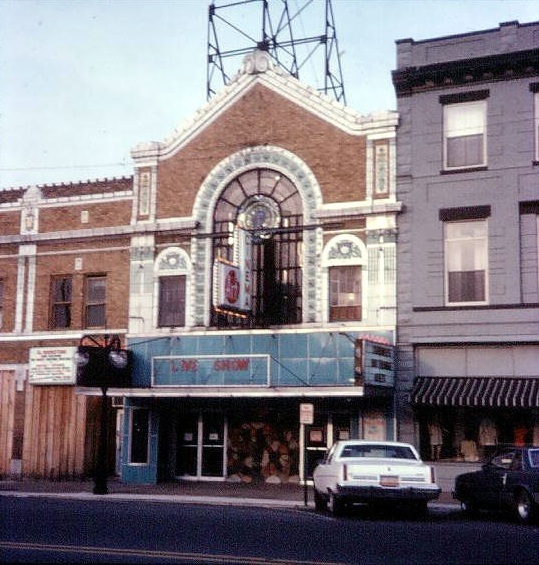 The Tivoli Theatre was opened on May 21, 1925 by the Mishawaka Theater Corporation, as the city’s premier entertainment venue of its day for both vaudeville acts and silent films.

Designed by Chicago architect Edward P. Rupert in an Italian Renaissance/Neo-Classical blend, it could originally seat 1,400.

Its facade, made of red brick decorated with ornate cream-colored terra cotta, was highlighted by a large arch-shaped window with two smaller windows on either side.

Besides the theatre, the Tivoli Building held several stores and apartments upstairs.

In 1929, the theatre was wired for sound, and from then on, it featured movies only. It was remodelled in 1937 to the plans of architect Lawrence Monberg of architectural firm Monberg & Wagner

It remained Mishawaka’s largest and most popular movie house for nearly three more decades, until closing in 1958.

The Tivoli Theatre reopened in the late-1960’s as an adult theatre called the Cinema Art and remained so until closing in 1991.

It was named to the National Register of Historic Places in 1998 and its exterior retained most of its original decorative elements.

Sadly, after a valiant struggle since the early-1990’s to save the Tivoli Theatre by several groups, the theatre was razed in February 2005, to clear the site for future redevelopment and an apartment building now stands on the site.

Here is a link from the city of Mishawaka:
www.mishawakacity.com/histivoli.asp

Lost Memory: Thanks for the Tivoli photo that really shows off the top facade that was simply beautiful though the doors and surrounding area were not kept the same….sure would love to see a photo of what that area looked like before the bad changes were made. It would be interesting to see what type of original doors were part of the original theatre facade. There are many theatres that have appeared on CT in various stages and I had great interest in this one being saved, but unfortunately it was not.

While viewing the March 16 photo I clicked on ‘copy’ and pasted it into an email window then enlarged it to see the facade tile work and to my amazement it ‘was’ very ornate. The folks of Mishawaka should be ashamed of themselves for letting this architect be lost, forever in their Indiana town!

And what is there now?

I was in Mishawaka today, and it appears that they’re building a condo complex or apartment building of some sort.

abby: Thanks for this update since my post of last March.

I grew up watching sci-fi/horror movies (especially Roger Corman’s Poe series) at the Tivoli with my Dad on Sunday afternoons. Most times it was a double feature! My favorite memory is of convincing my Dad to take me to see 3 Poe movies (Pit and the Pendulum, Tales of Terror and Premature Burial, as I recall). My Dad would fall asleep in the cool air-conditioning, so he didn’t mind! I made it through the first 2 but when the opening scene of Premature Burial started with the gravedigger whistling, I had to wake him up and tell him I wanted to go home! 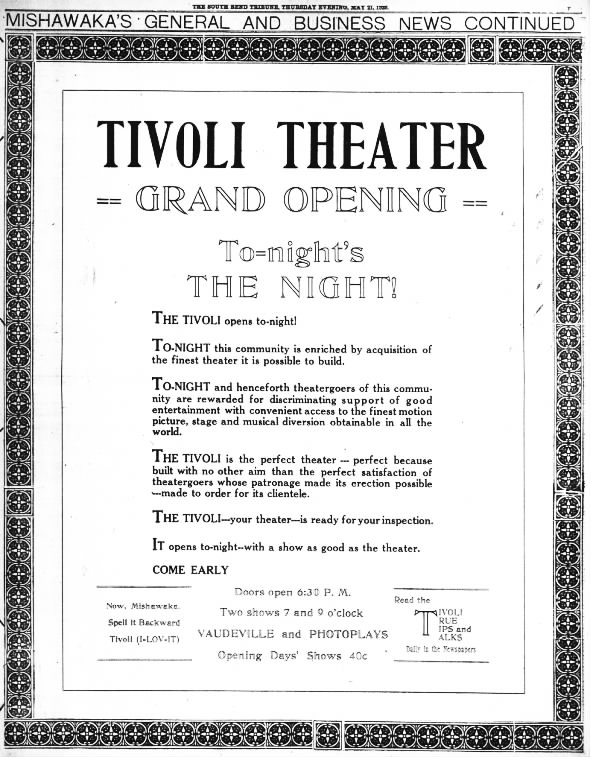