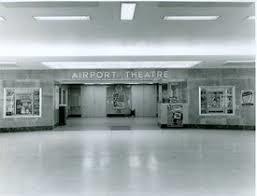 The Airport Theatre was located inside the old Pittsburgh International Airport building. It opened around 1952, and operated into the early-1970’s.

After watching a “Stuff That’s Gone” documentary on our PBS affiliate, this was in the old Pittsburgh International Airport, which has been since demolished.

I believe the theater survved through the 70s.

The Airport Theater at the now-razed Greater Pittsburgh International Airport was straight ahead as you entered the main entrance. It was the farthest destination inside the building through the main corridor. It was razed when the airport was greatly expanded in – what? – the late 1960s or early 1970s.
Like many drive-in theaters, the Airport Theater distributed weekly playbills, with the present attraction on the front cover and about three forthcoming movies advertised on Pages 2, 3 and 4.
I was always intrigued by the theater and went there once or twice
before it closed, notably for a re-release combination of Hitchcock’s “Marnie” and “The Birds.” (Normally the theater had played late-run single features, so this program was quite unusual.) Two major disadvantages of the Airport Theater: (1) You had to pay airport parking rates just to be on the premises, and (2) The cinema wasn’t nearly well enough insulated from the deafening noise of planes taking off just beyond the walls. – Ed Blank

Have any other airports in the United States ever had commercial moviehouses within them? Has any airport today such a theater? – Ed Blank

Can’t let the general public in now, too many security issues.

I’m sure you’re right, Ken, but I hadn’t considered that. The folks waiting to board planes and the folks waiting to pick up passengers from arriving planes are now divided in half, which in turn would splinter in two any potential audience for a commercially run moviehouse.
The theater was built in an airport that opened in the early 1950s when families could still drive to the airport to watch planes land and take off and maybe take in a movie as part of the experience of being in a then-ultra-modern facility. This building even housed one of the Pittsburgh area’s (temporarily)leading nightclubs, the Horizon Room. – Ed Blank

I loved the Airport Theatre, and went there often. It was one of the best places to see wide-screen films, because it wider than it was deep. Only appeared to have about 400 seats or so, all on one level, which sloped down toward the screen. My father would drop me and my older brothers off at the airport, then pick us up after the show. (We only lived a couple of miles away.) I can remember seeing 2 different releases of “The King and I” there, one in about 1957, and another during a re-release in the 60’s. Saw Disney’s “Peter Pan” there, in 1953, as well as many others, such as “Flower Drum Song,” “A Majority of One” (both 1961), “The Counterfeit Traitor,” Taras Bulba" (both 1962),“Kings of the Sun” (1963), and “The Good, the Bad, and the Ugly” (1966), which may well have been the last film I ever saw there. The theatre, as stated above, was at the end of the central corridor of the airport. A small boxoffice was on the right, and the popcorn stand on the left. The boxoffice person would also sell the snacks. I remember the popcorn tasting more oily than the popcorn I got at the Sewickley and Coraopolis Theatres, possibly because they only warmed up previously popped corn, while the Airport Theatre popped their own. They also had drinks, like orange and cherry Crush, which I also never saw anywhere else. As I said, the theatre was great for widescreen films. I remember the sound being pretty good, too. Some years later, I realized the theatre had been razed for an airport expansion. However, the central aisle between gates, still sloped upward, in the same angle as the interior of the theatre, then sloped downward again, indicating the ghost of the structure it had overtaken.