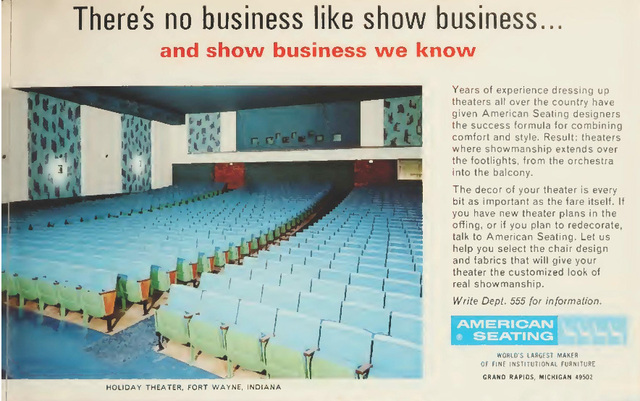 Especially during the 1970’s and 1980’s, the Holiday I & II cinemas were, for my money, the best places to see a movie in Fort Wayne. Opened in 1969 as the single screen Holiday Theater, a second auditorium was carefully added in 1970 so that the building right up its demolition looked like a purpose built-twin. It was located on the grounds of the Northgate Shopping Center.

The lobby was done in that Danish Modern/California coffeshop decor that was trendy when the theater was built which would look so retro now (or perhaps just a little tacky). I recall a fireplace in the lobby as well.

The auditoriums were large with huge, gently curved screens. There was little decor save white neon around the ceiling. They had outstanding sound systems and at least one auditorium had 70mm capability as I saw both “Close Encounters” and other blockbuster films of the late-1970’s and early-1980’s there in 70mm. I will never forget seeing “Alien” there on its opening Friday night; it was one of the most intense experiences I have ever had.

The theater survived into the 1990’s and was eventually acquired by the Regal chain which closed it on August 31, 2000, having built a rather nondescript six-plex (named the Holiday 6) just a few hundred feet away. The Holiday I & II sat vacant and forlorn for three years, and the building was finally demolished in 2003.

The Holiday 6 is also now closed.

Closed by Regal as a sub-run discount house on August 31, 2000 as the then financially-troubled circuit was looking to get out of lease situations all over the U.S. It kept operating the nearby Holiday 6 as a first-run house, converting it to sub-run discount status in April 2004, and then finally going for a full-price art/indy-centric operation until its closure November 13, 2005.