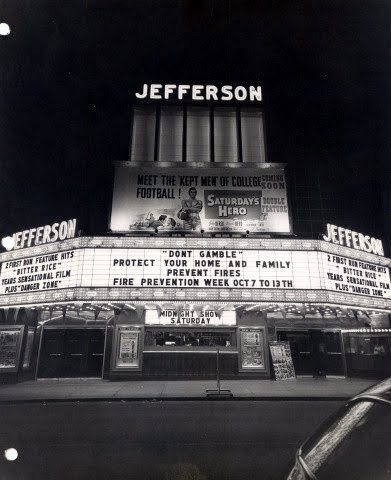 Most of the Alliance properties went to Cinecom, then through a legal settlement to Sportservice Theaters. Sportservice sold all their theaters in the 80’s. I do not know if any of their drive ins survived, notable loss Miles in Cleveland, OH. Beautiful Paramount and State Theaters in Anderson still survive.

From 1940, a photo ad announcing the re-opening of the Jefferson Theatre after having been remodeled.

The Jefferson was across the street from the Embassy, more or less. The even side of the block is now taken by a Hilton hotel.

Here is a 1927 photo of the Jefferson Theatre.

An article in the November 17, 1912, issue of The Fort Wayne Journal-Gazette saying that contracts for construction of the Jefferson Theatre had been let noted that the project had been designed by local architect Charles R. Weatherhogg.

The February 2, 1913, issue of the paper carried an ad announcing that the Jefferson would open on February 8. Admission to the house, built exclusively for movies, would be five cents.