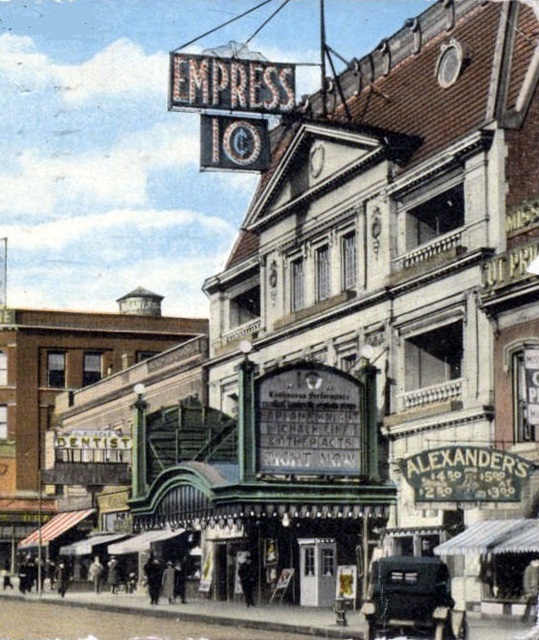 The Empress Theatre sat on the lot just west of the World Theatre on Douglas Street. It opened with vaudeville on January 30, 1913. Movies became part of the program soon after its opening. It burnt to the ground in 1929.

The World Theatre was a block east of this block; it was on the same block as the Rialto. The new Union Pacific Headquarters building occupies that entire block now. The block where the Empress sat is a city-owned parking garage along Douglas Street; First National Bank’s public space with fountains and sculptures are on the north side of the block along Dodge Street and east of the 40 story tower between 16th and 17th and Dodge and Douglas Street.

From the 1920s a postcard view of Douglas Street along the Empress Theater in Omaha.

A history of Omaha published in 1917 says that the Empress Theatre was built in 1912. The Empress was originally owned by the J. L. Brandeis Company.

The Empress Theatre was built in 1912 and was said to be the first theater in the West that had a passenger elevator for patrons to take them from the second to the third floor. It was also said that it would be impossible for a single life to be lost as the theatre was completely fireproof. It launched with vaudeville on January 30, 1913 and motion pictures were part of the shows almost from the outset. The theatre had 1,492 seats at opening with all of them filled.