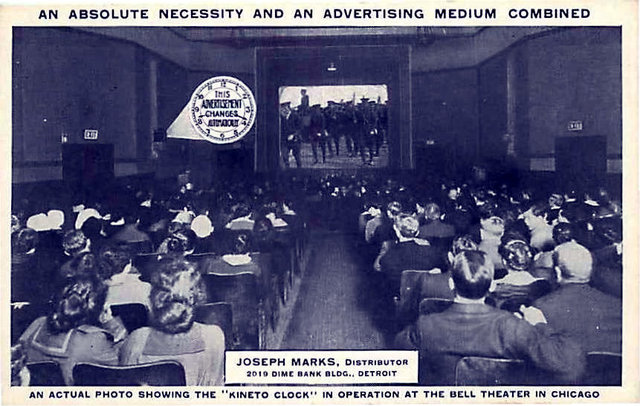 The Bell Theater was opened in 1910 and closed in 1953. It was later converted into a metalworking shop before eventually being demolished.

Yes this is the BELL theatre (w/ correct address) I’d recalled under nearby CORTLAND theatre comments last week. Despite its alternate latter-day use the place I recall still looked like a theatre (w/marquee) and name still identifiable, when it disappeared from sight altogether around 1962.

The Bell Theatre closed in June of 1953. I lived in the neighborhood and actually was there on its' last operating day. When I passed by it the next day, it had on its' marquee “closed for remodeling”. They never did reopen. I believe the movies playing that Sunday afternoon fifty-five years ago was I LOVE MELVIN with Donald O'Connor and Debbie Reynolds plus TROUBLE ALONG THE WAY with John Wayne and Donna Reed. I went to St. Sylvester’s Grammer School at that time, and would go by it often.
John Cordell

There was another Bell Theatre on Madison St. that seated 350, any info on that Bell Theatre?

Chris1982; I have added a page for the Bell Theatre on W. Madison Street.

btw I DIDN’T ‘favorite’ this (Bell) theatre, I instead wanted to favorite the one photo associated with it. This is a computer world however where things don’t work correctly or things aren’t explained fully much less well or things cannot be corrected once entered, so I understand just fine.