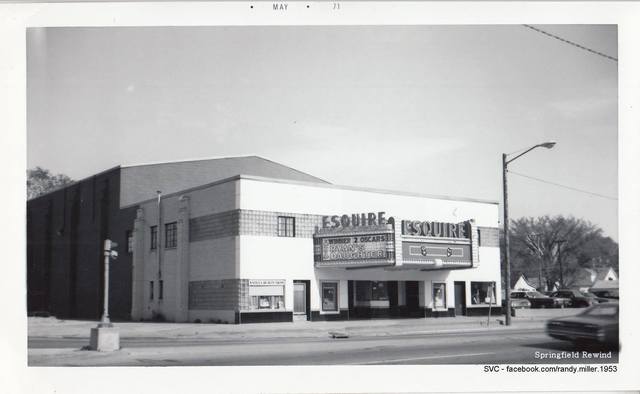 The Esquire Theatre was opened December 16, 1937. It was last operated by Kerasotes Theatres until its closure in 2004. It was previously part of the Frisina Amusement Co. chain for many years. It was demolished in July 2016.

When I worked here in 74 it was a “tri-plex.” Those were big names in those days.

I amsorry to hear of the demise of the esquire.I was the mgr of this fine theatre for 2 years from'75-‘77. there were a lot of fine shows exhibted during that time,but oddly my favorite is “Monty Python and The Holy Grail.

I almost forgot,even ‘though I mentioned monty python,we also were showing about the same time One flew over the cookoos nestand did a sneak preview for the omen.

In case OCRon’s link eventually goes bad, here is the meat and potatoes of what may soon be happening to the Esquire…from the State Journal-Register & reporter, Jamie Munks (as edited by me): The owners of the former Esquire Theatre property have told city officials they intend to raze the long-vacant building, which could make way for more development along MacArthur Boulevard. With the former Esquire — a large, nondescript gray building that sits just south of MacArthur Boulevard and South Grand Avenue — being demolished will fall in line with hopes for changes along the corridor. “There are always people looking at that property,” MacArthur Association President Ken Dillman said. “But there’s the expense of infrastructure upgrades, demolishing the building and then developing the property, so there are other places in town where it’s less expensive.” The former Esquire is a registered vacant building with the city, and the registration will come due after three years on Feb. 16. At that point, in order to comply with city code, the owners, AMC Theatres Inc., must either bring the building up to code or demolish it. AMC has indicated verbally that they plan to demolish. AMC acquired the property when they bought much of the Kerasotes Theatres circuit several years ago, and it’s been on the market since then. The listing price has been as high as $1.2 million for the AMC-owned properties on MacArthur Boulevard, though the price may be negotiable. AMC, incidentally, was bought out (over a year ago) by Beijing-based Dalian Wanda Group for $2.6 billion. Springfield area officials believe that historic restoration of the building is not a viable economic option. The former Esquire, which is the largest undeveloped property along MacArthur, has been vacant for about a decade.

The Esquire Theatre opened on December 12, 1937. This web page has the transcript of an oral history interview with Bond Tarr (opens in an embedded PDF format) who worked at the Esquire in the early to mid-1970s, and several passages deal with events at the theater during that period.

The January 15, 1938, issue of The Film Daily notes that the Esquire Theatre was owned by the “Frisina Kerasotes Circuit,” so the two chains were partners in this theater from the beginning. The article also says that the Esquire, which cost &150,000, was designed by Peoria architect J. Fletcher Lankton. There is also this description of the original appearance of the theater:

“The front of the house is built of Vitrolite glass bricks and ivory structural glass with chromium strips. The sidewalk is done in colored terrazo [sic] and the marquee embraces a combination of four colored neons and flashing lights.”

Judging from that, the Streamline Modern Esquire might have resembled the Varsity Theatre in Peoria, which Lankton designed for Kerasotes Theatres in 1939.

The Esquire was demolished in July 2015. See this historical perspective on the former movie house.