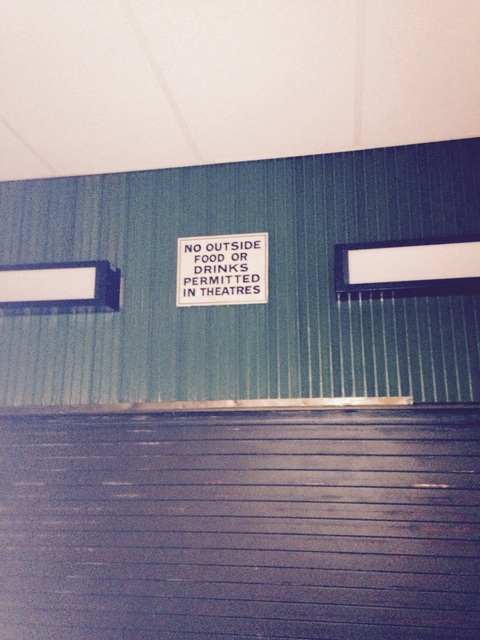 The Eric Tri-State Mall was opened as a twin November 11, 1970. It was formerly run by the Sameric chain and was in Tri-State Mall on Naamans Road in Claymont.

thanks ediemer for a well written article.

Thanks for the stories ediemer. This link is for a theatre near Atlanta Georgia..

The first comment has my story of having to run the endless loop platter.

I could never get over the lengths the theatre owners would go to trying to get rid of the projectionist position.

I worked the projection booth at the NATO convention when it came to Atlanta in 1987. The Christie company had one of these things set up on the exhibit floor with a big display reading “Let The Gremlins Do It.” I guess the gremlins were not covered by the minimum wage law. People were free to wander the exhibit area at any time during the 3 day convention, but on the final day there was a two hour period set aside for everyone to attend at the same time. When I walked through on that day I noticed that the platter was not turning and thought someone might be giving a demo to the crowd gathered around it. No such thing. When I made my way to the front I saw that the film had either backed off of the edge or had been slung off onto the floor. Two Christie reps were on hands and knees splicing away trying to get the mess cleaned up before the end of the exhibition period.

That night at the banquet I ran my five presentation reels flawlessly without the help of a platter, endless loop or otherwise. Later I saw the DM of the company I worked for and asked him if he noticed the difference in the way I ran the booth compared to the endless loop platter he had also seen that afternoon. He just said “You have to keep up with the times” as he walked away. Theatre owners: they would spend $10 to aviod paying someone a buck and still think that they had come out ahead.

I went at least once in the later part of the 80s. Almost went to see the Star Trek movie that opened in 1997.
I can’t recall if it closed and reopened in the meantime. At some point it opened up as a comedy theater. I haven’t been to that mall much since Value City turned into Burlington Coat Factory.

“Scream” played in the theater from December 96-August 97. In the little shoe box theater #5. A nine month run. I’m pretty sure it was still playing when the film was released to video! Hah!

This is where I saw STAR WARS in 1977. Also Empire Strikes Back, Return of the Jedi, Alien, Invasion of the Body Snatchers, Grease, The Thing, Porky’s, Raiders of the Lost Ark among many others. Had a good run thru all of the 70’s and 80’s. Started getting a little sketchy in the 90’s and I stopped going there. Fond memories, but Tri-State Mall needs to be bulldozed.

I probably saw more movies as a kid at this theater than any other one. Everything from Raiders of the Lost Ark and Star Trek 2 to obscure oddities like Inchon…

This opened on November 11th, 1970 with one screen and the second screen opening on Christmas Day. Both grand opening ads in the photo section.

when did it close?