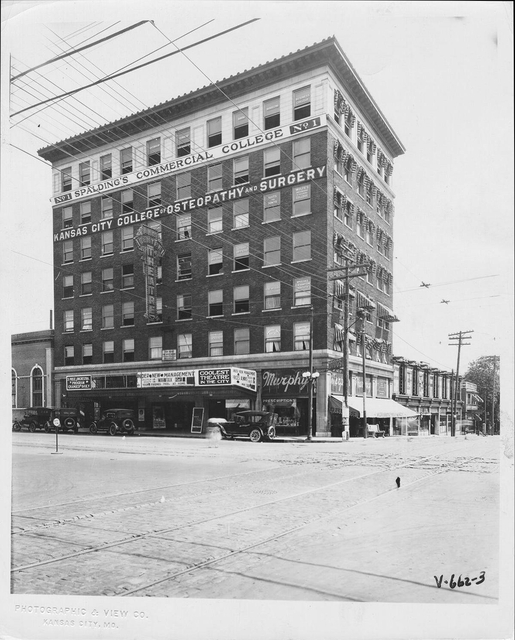 Located in an eight-story building at the southeast corner of E. 15th Street and Troost Avenue. It was opened December 2, 1915.

In the 1936 American Film Review annual, the New Center is listed as having 1,400 seats and it was closed at that time.

Here is a link to a photo of the New Center Theater.

The March 21, 1925, issue of The Reel Journal reported that W. Lee Vaughan of the Art Theatre, Kansas City, Kansas, had bought the New Center Theatre in Kansas City, Missouri. The May 9 issue brought more news about the house:

“The New Center Theatre, Fifteenth and Troost, Kansas City has been remodeled and refurnished by J. D. Lynn and W. Lee Vaughan, new managers. A Wurlitzer Hope-Jones organ has been installed. The theatre seats 1,500.”A letter from J. V. Lynn, manager of the New Center Theatre, was published in an ad for Arctic Nu-Air Systems in the August 14, 1926, issue of The Reel Journal. Mr. Lynn describes the New Center as having “…an unusually long auditorium and deep pocketed balcony….”

An unusual policy in place at the New Center Theatre is mentioned in the March 8, 1930, issue of The Film Daily:

“Kansas City — Talkers at nickelodeon prices have made their bow here in the New Center, 1,450-seat house owned by L. O. Gardner, who offers ‘Bargain Monday’ performances that are advertised as the biggest show in the U. S. for a nickel. On other nights the scale is 10 and 15 cents.”

This opened on December 2nd, 1916. Grand opening ad in the photo section. It was at the SE corner of Truman and Troost.

The New Centre Theatre is on David and Noelle’s list of known Boller theaters as a 1916 project.