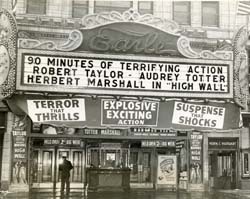 The Earle Theatre was one of the leading theatrical showcases of the United States for popular stars during the second quarter of the 20th Century. The theatre opened March 24, 1924 with 10 acts of Keith Vaudeville. Located at the southeast corner of S. 11th Street and Market Street in downtown Philadelphia, located at a convergence of public transport routes and near seven major department stores of Market Street East. Built by the Stanley Company as part of a seven story office building, the theatre was named for George H. Earle, Jr., an investor in the Stanley Company.

The Earle Theatre was designed by Philadelphia architects Hoffman-Henon Co. in the neoclassic Adam style and at that time it was the most expensive theatre ever built in Philadelphia. The theatre was lavishly decorated with marble, murals, tapestries, and other exquisite furnishings. The 35 feet high grand lobby’s decor included 27 murals by George Harding. The auditorium had 2,768 seats, and a 35 feet deep stage. The Kimball organ was played until the early 1930’s, when the console was stored away in the Mastbaum Theatre’s basement. A holding tank for aquatic animal acts was in the Earle Theatre’s basement.

The sign on the front of the theatre proclaimed ‘World’s Biggest Stars’ and all the stars, appeared on stage, as did orchestras and organists. The list of stars started with Keith vaudeville and goes on and on. Eddie Cantor, Frank Sinatra, Josephine Baker were among those who appeared on stage. Later the Earle Theatre became the Philadelphia theatre of the Big Band era, with Benny Goodman, Tommy Dorsey, Glen Miller and Duke Ellington being among those featured. Recording artists appeared to promote their hit records. Movies were shown, but often ‘B’ movies as the live acts were the main attraction. In October, 1951, the world premiere of the film noir “The Racket” was held at the Earle Theatre.

By 1953, television had arrived and rather than filling the Earle Theatre seven days a week, theatregoers stayed home to watch their favourite stars. February 26, 1953 was the last stage show. That year Stanley Warner’s lease was over, and the Earle Theatre was demolished. It was replaced by a two story store, which as of 2008, stands though it has had changes in retail tenents. The Earle Theatre is the subject of the 1986 Annual published by the Theatre Historical Society of America(THSA), and is included in books on Philadelphia theatres, also authored by the late Irvin R. Glazer. An article by Barry Goodkin features the Earle Theatre in the the third quarter 2003 edition of Marquee of the THSA.

Here is an interior photo from the Glazer collection:
http://tinyurl.com/y9nuoqh

Love the March 1953 photo listed above. Notice, right next door is a Horn & Hardart- another former Philadelphia tradition. Here are some shots of the Earle during demolition (thanks TUL). Sad:

When my father was working his way through college he was Head Usher at the Earle. He also had some involvement with the backstage. Sadly the only talent I remember him mentioning was the young Sammy Davis, Jr. and oddly, Tallulah Bankhead (although who knows what she was doing on the bill). Allegedly he sat through Gone With The Wind for over a month, though the note suggesting that the pictures after the live acts were mostly B Movies may prove this to be an exaggeration. I will try to find out what my mother remembers about the Earle and report back.

Sad photos of the demolition,Marion.

thanks BR. Sad photos,you are right Tisloews,but for Historical reasons Great to have.

This photograph of the Earle Theatre was taken in 1929 by George Mann of the comedy dance team, Barto and Mann.

Hereâ€™s a photograph of the Earle Theatre taken in 1933 and another photograph taken in 1937 by George Mann of the comedy dance team, Barto and Mann.

Thanks for posting the new old photos Brad.

These photos and comments are so great. My mom was Frances Elizabeth Wilkins, her maiden name, from Cambria St., Kensington, born in 1925. I believe she saw Frank Sinatra at the Earle early 40s? I love imagining her having that experience. She loved movies and music. Thank you for the info, wonderful capturing of the atmosphere. Thanks for the Temple archives too! I went to Temple and didn’t even know! Dan

or in the photo section