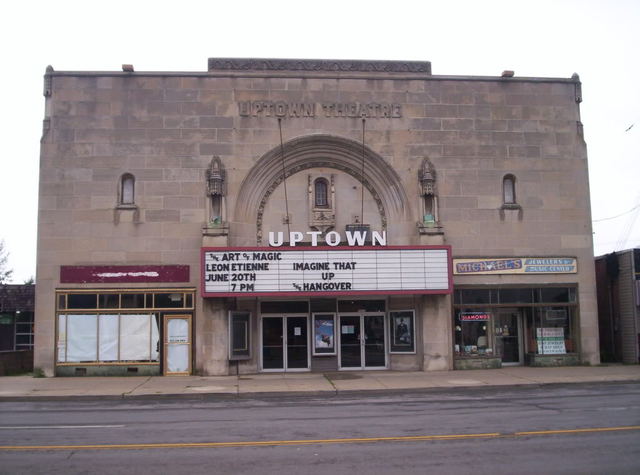 Opened as a single screen theatre in December 1927. It was built for the Kallet Theatre Corp. and contained 1,500 seats. It was tripled and continued to screen movies until 2012 when it was de-tripled and began a live performances policy. It was closed in 2014.

jimvin… Might you have the premiere date for the Uptown’s engagement of “Sleeping Beauty”? July what?

The opening date of “Sleeping Beauty” at the Uptown was July 1,1959.
I have 6 newspaper ads and an article about this. They really went all out in advertising the fact that the Uptown was the only theater in the area that had the special equipment to show the film “as Walt Disney visualized it’s perfect presentation”.

That is a picture of the Uptown Theatre. Two the place may be shuttering its doors and only doing live acts from now on. It is a sad day and I am beyond angry the owner is keeping it very hush on what is happening to the place. She should have sold it and not backed out fo doing so. She has no clue how to run the place and has forced an 87 year old icon of Utica NY to fall. I know all this because my boyfriend works there, has for 9 plus years. He is losing his job today. No one has any respect for history or what this theatre had once meant to so many people.

The Uptown is still open, now running as “The New Uptown Theatre” though the only thing new about it is the management and the fact that they occasionally have live performances. I haven’t been there since it re-opened. My memories of The Uptown was that it was basically a dump, the kind where you could see a second-run film for pretty cheap, which for me was a the draw. I didn’t care that the seats were old and uncomfortable, that the popcorn was often stale, and picture slightly blurry as The Uptown came as close to a grindhouse aesthetic as I could find in Upstate NY at the time. You could go to the diner, bowl two games, and still see a movie there for less than the cost of seeing a similar film elsewhere. It was that cheap, so of course it was imperfect. The managers were totally cool too, allowing the occasional sneaked food or drink. I think we ate a pizza in there once.

I never get around to Utica much anymore. But if I did, I would definitely revisit The Uptown. I’m curious to see what they’ve done to the joint.

I had a “mini-tour” of the Uptown about a month ago. It no longer has 3 screens. It is being renovated and is now opened up as a single screen theater again. Much work is still to be done. No movies have been shown for a number of months, but various types of live performances have while renovating is on-going. A stage has been built and the very large screen removed. The screen, that I hope is temporary, is only the width is the stage However I’m happy that the theater is being revived and not closed. When I get more info, or visit it again, I’ll have an update.

Does anyone know if the architectural elements (if there were any) have been salvaged in its being converted back to single-screen?

The January 27, 1928, issue of Motion Picture News said that Robbins and Lumberg opened the Uptown Theatre in Utica on December 29, 1927. An issue of the same publication from early 1927 said that the Rolu (Robbins and Lumberg) Theatre Company’s new house on Genesee Street was being designed by the local architectural firm of Rushmer & Jennison.

Herbert D. Rushmer was the senior partner of the firm, and he and Albert H. Jennison had been partners in a firm with noted Utica architect Jacob Agne Jr. from 1900 until Agne’s death in 1918.

Has been closed since at least 2014, Businesses still operate in the side locations but the theatre itself has seen no activity