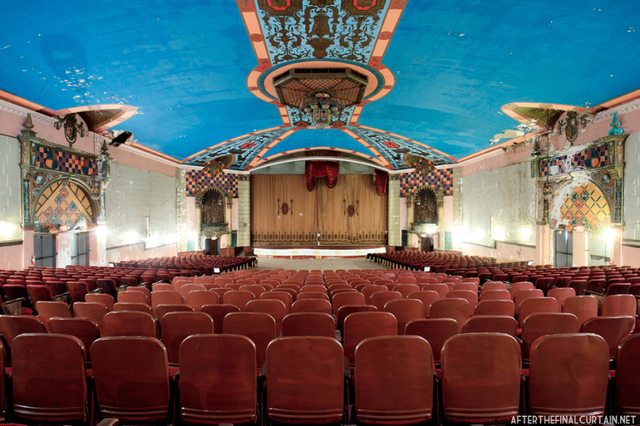 The Lansdowne Theatre opened in Lansdowne, a Delaware County suburb of Philadelphia, on June 7, 1927 with the movie “Knockout Reilly” starring Richard Dix and 1,381 seats. Originally operated by Stanley Warner Equity and Herbert Effinger, the theatre was designed by prolific Philadelphia-based architect William H. Lee and was decorated by Gibelli & Co. Nearby theatres designed by Lee that continue to show movies include the Anthony Wayne, Bryn Mawr, and Narberth, though each of their auditoriums have been divided into more than one theatre. Other nearby theatres designed by Lee have met varying fates, with one showplace, the State Theatre in Easton, reused for live shows.

The Lansdowne Theatre is an ornate movie palace inspired by romantic Spain. The lobby and foyer are Spanish Mission in style. The auditorium is influenced by Spanish Baroque, and has painted ceilings possibly based on Nero’s pleasure palace. The theatre was decorated by Harry Brodsky. While there are some less than sensitive attempts at redecorating and the damage due to lack of the climate control, the theatre retains much of its original appearance including light fixtures, stage curtains, seating, carpeting and plaster reliefs.

The original ‘blade’ sign and marquee were removed before 1941 possibly because it lacked space to list what was being shown at the theatre. On October 5, 2012, the marquee, restored with new ‘sparkling blue’ neon, was lit for the first time since 1987, and the first time the neon has been fully intact since the mid-1950’s.

The theatre’s Kimball 3Manual/8Rank organ faded with the silent era and was rediscovered in 1962 by the Theater Organ Society of the Delaware Valley, and restored. It was played regularly to at least 1975, by which time it was the only playable pipe organ in a Philadelphia area theatre. The organ was sold to raise funds to replace the air-conditioning system. It was later installed at a private residence in Mississippi, and sold again in 2003 to a collector in Arizona.

The Lansdowne Theatre closed July 8, 1987 as a dollar house, a last run theatre. Closure was due to the result of a fire in the electrical sytem under one of the retail spaces. “Beverly Hills Cop II” starring Eddie Murphy was the final fim screened. In 1987, the theatre was placed on the National Register of Historic Places and featured in David Naylor’s 1987 book, the National Trust Guide ‘Great American Movie Theatres’.

It was purchased in late-2007 by the non-profit Historic Lansdowne Theatre Corporation. The restored building will host the performing arts including popular music concerts, theatre and dance. Film will also continue to play a major role in the building. On April 10, 2010, the Lansdowne Theatre hosted a performance by the nationally known acapella group ‘Straight No Chaser’ to a sold out performance. The theatre was featured in a series of commercials for 2010 AMC Fearfest, and served as the backdrop of the filming of ‘Mad Ron’s Prevues from Hell’ and in the 2012 film “Silver Linings Playbook”.

The Lansdowne Theatre is the grandest of all the theatres that are closed, yet intact, in the Philadelphia suburbs.

Veteran concert promoter Herb Spivak said this afternoon in an interview on WXPN radio that he is involved with the restoration and that it is nearing completion. Watch this space…

Up next: some exterior work and a campaign to get a liquor license. Philly.com story here.

Facebook plea for help in restoring 1,358 seats so that’s the current seat count.

Sorry that we haven’t updated for awhile. The outdoor lobby—– ticketbooth, pendant lights, poster cases and stucco have been restored. New poster cases that appear close to the cases in 1927 have been installed on the front façade.

With grants from the Commonwealth of PA, National Endowment for the Arts and National Trust for Historic Preservation, the project architect Mills + Schnoering is developing schematic design documents for the entire building. Contractor to be named in the near future.

Matt, I can have the above good work placed in the Intro above. Remind me please what year- perhaps 2015-16? that those exterior renovations were done?

Here is the “Save The Lansdowne Theater” Facebook page. They are hosting a free concert on May 20th. Great Photos Section on the page too.

The Video Mr. Haas provided a link for is worth the visit. The short portion about the Landsdowne leans a bit more towards the town and the people but is very nicely done