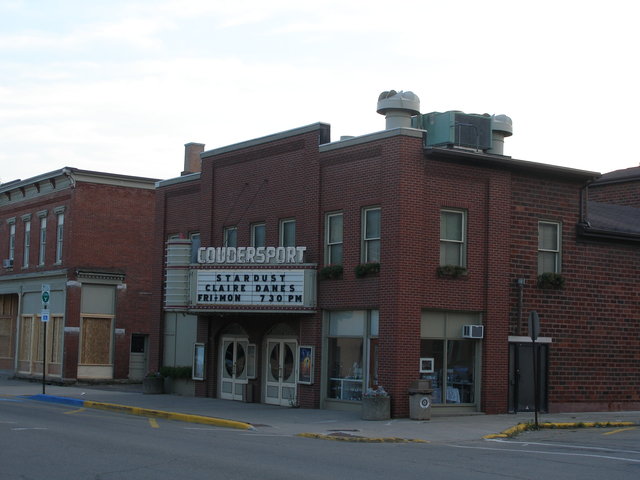 The Cloudersport Theatre was opened on April 9, 1928 with Alec B. Francis in “The Shepherd of the Hills”. On November 2, 1945 a thrown cigarette caused a fire which temporarily closed the theatre. This small town, second-run theatre is the only movie house for miles. Originally seating around 500, the independently-owned Coudersport Theatre is a classic example of a small town treasure.

I’m sure he would so I’ll cut and paste your above post into an email to him and wait for his answer.

Lost: I haven’t heard back from David at the Coudersport Theatre, but when I do I will let you know or he may just post his comments here.

David wrote to me and said that the theatre had a pipe organ, but it was destroyed in the flood of 1942.

Now that’s a great idea and I’m sure David wouldn’t mind what color it is. ;)

yes,tisloews it is a classic theatre and thanks for the pictures and of course the great stories.

drove by the other day ( i was on vacation) and was surprised to see a theater in such great condition,wish I could have went in

Coudersports is also known for the name, Eliot Ness. He lived the last 2 years of his life there. A book entitled Eliot Ness The Real Story was written by Paul Heimel. Paul was born and raised in the small town. He also helped write the history of the theatre on their website.

The Coudersport Theatre opened its doors on April 9, 1928 with Harold Bell Wright in “The Shephards of the Hills”.

On November 2, 1945, the theater survived a fire, caused by someone throwing a cigarette inside near the balcony causing the theater to burst in flames. It was later rebuilt and reopened a bit less than a week later.