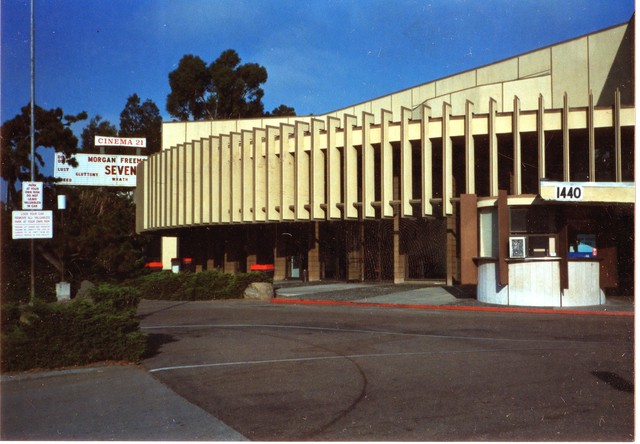 Opened in July 1963 with “55 Days at Peking”. Closed by the Mann Theatre chain in September 1998. After closing, served as a church and sporting goods store before being torn down to build rather ugly condos.

The Cinema 21 was also notably flooded during the epic rains of 1983. The normally minuscule San Diego River put the whole floor of Mission Valley under water, and I believe the water nearest the screen was upwards of six feet deep. It survived the flood, but not the video revolution.

I also worked at Cinema 21 and have some good memories here. The back doors never seemed to close right and I’m surprised more people hadn’t figured that out and didn’t sneak in more often. I have seen Dick Tracy, the Rocketeer, and Presumed Innocent more times than I can count. Would love to talk to anyone who also worked there in 90 and 91. We used to take breaks on the roof and I remember as a going away present I was given one of the “H"s from the marquis for my first name. I kept that thing for years hanging on the gate of my house.

When this theater opened was it the largest in San Diego?

No. Even the Loma, which opened in the 40s, shows a higher seating capacity on this website (admittedly, it actually seems a little too high from what I remember when working there). There was also the Fox-Downtown, which was much, much larger than either the Loma or the 21 and opened in ‘29 (originally a movie house, the Fox was converted into Copley Symphony Hall in the 80s).

Hey Zubi. I worked at the 21 from early 1982 (Chariots of Fire) until Silverado. I started as an usher and worked my way up to Asst. Manager. I remember the flood of ‘82. We had to remove the seats from the first 8-10 rows as the water was rising. I was part of the leftover beer with Mickey – Pressl was pretty upset. Mike G. worked there when I started.

Attn: neeb Thank you ever so much for your research. Very helpful to those of us who live somewhere where the San Diego papers aren’t available on microfilm…I have had to ILL them in, here in Pittsburgh, PA. Regarding the missing ads for August 13, 1969 through December 23, 1969…the papers at one point refused to carry ads for X-rated films any more, and since the Cinema 21 was a mainstream theater, I am guessing (not really sure)that all of those missing weeks were the San Diego premiere engagement of Midnight Cowboy, which started out as being X-rated, before being resubmitted and lowered to an R. Alas, there were some mainstream non-pornographic films in those years (1968-1980s)that were art but were still rated X and whose advertising was not permitted by conservative editorial policies.

I worked at the Valley Circle from 1969-1973. What memories . A few years ago I spent days at the downtown San Diego Public library copying movie sections from the SD Union and Tribune.

We played A CLOCKWORK ORANGE and we had to leave flyers all over the city as the film was X rated.

kagemusha98, Do you have some of those flyers? I’d love to get a look at them.

There was a similar issue when THE DEVILS played at the Cinema Grossmont. I had to look up the Daily Aztec to confirm that it was indeed THE DEVILS and not something else.